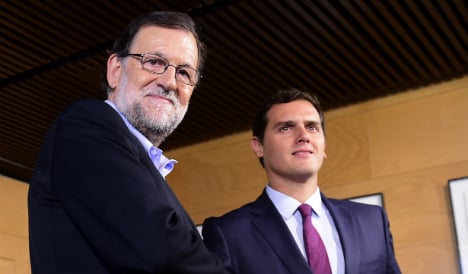 Mariano Rajoy has agreed to conditions set by the party of Albert Rivera. Photo: AFP

The announcement by acting prime minister Mariano Rajoy comes after his corruption-hit PP agreed to implement a series of anti-graft measures required by Ciudadanos as a condition to sitting down for talks on backing its bid to form a minority government.

Rajoy has been trying to garner support from his rivals to form a government following elections in June — the second in six months — that saw his conservative PP come first without an absolute majority, but until this week has had no success.

“We will start negotiations tomorrow,” he told reporters in a move he qualified as “decisive.”

But Rajoy dodged questions about his party's decision to approve the anti-corruption measures, which was only revealed by Ciudadanos chief Albert Rivera in a press conference following a meeting with the acting prime minister.

The measures include forcing any person in public office who has been formally charged with political corruption to leave his or her post immediately.

The issue is sensitive for the PP, which has been hit by a string of graft scandals over the years.

Corruption was a big topic in campaigns before elections in December and again in June but this did not stop the PP from coming first each time, though without an absolute majority.

The party won 137 parliamentary seats out of 350 in June's elections, and Rajoy now has to form a coalition or minority government and push it through a vote of confidence — the date of which is likely to be announced later Thursday.

In order to do so, he needs a simple majority.

But even if Ciudadanos, which gained 32 seats in June elections, accepts to back the PP after negotiations, Rajoy will still not have a majority to push his government plans through.

He also needs the support of the Socialists, his traditional rivals, but they refuse to back him.