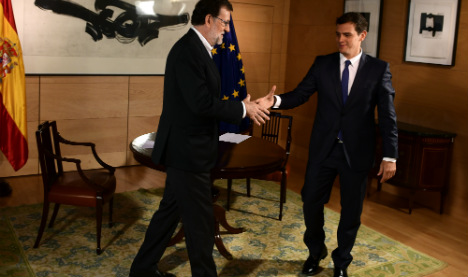 “If they sign, we'll be able to negotiate,” Cuidadanos' leader Albert Rivera told reporters on Tuesday, after listing six conditions for his centre-right party's backing.

Rajoy's conservative Popular Party (PP), in power since 2011, won June elections but fell short of an absolute majority, winning 137 seats out of 350.

That vote was a repeat election after a December ballot was similarly inconclusive.

Efforts to forge a coalition to break the deadlock have so far proved fruitless, with rival parties unable to overcome their differences, leaving the country in the hands of a caretaker conservative government.

Rajoy has been tasked by King Felipe VI with forming a coalition or minority government, which he will have to push through a parliamentary vote of confidence.

But to do so, he will need an absolute majority in the vote – at the very least, for 32 Ciudadanos lawmakers to abstain as well as the 85 of the Socialist Party, the PP's traditional rivals.

The Socialists, who came second in the June elections, have so far refused to back Rajoy.

Rivera stressed that negotiations, due to begin Wednesday with Rajoy, only go as far as covering a possible favourable vote. “We're not in the process of talking about entering into a government” with the PP, he said.

The conditions include a reform of the electoral law to help small parties and setting up a parliamentary commission of inquiry on illegal party financing.

Ciudadanos, a natural ally of the PP, rejects Rajoy's party because of corruption scandals that have tainted its reputation.

In short the party insists on the following six points before they will lend support: