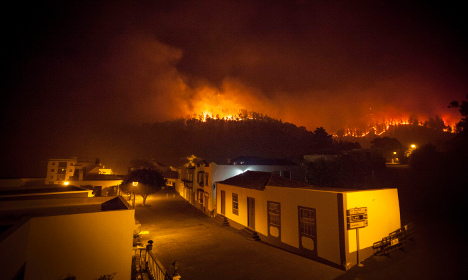 Around 2,500 people have been evacuated from their homes to escape the fire. Photo: AFP

The blaze, which has torn through a wooded, mountainous area of La Palma, one of the lesser-known islands of the Spanish archipelago off the coast of Africa, claimed the life of a park ranger shortly after it was started on Wednesday.

Around 2,500 people have been evacuated from their homes to escape the fire, which the 27-year-old told police he had sparked accidentally.

“The person suspected of having provoked the fire on the island of La Palma, Scott Verdini Stump, will be remanded in custody,” said a spokesman for the Canaries' High Court, Gonzalo Perez Ponferrada.

He said the suspect was “being investigated for causing a forest fire through gross negligence”.

More than 350 people have been battling the blaze around the clock.

A dozen helicopters and planes have also been dropping water above the affected area which continues to burn.