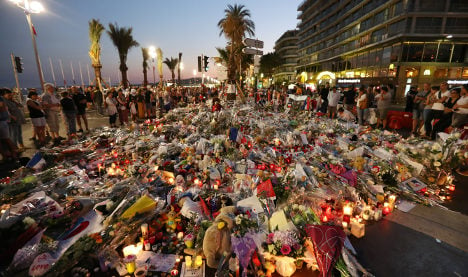 “We are made to suffer doubly: not only feeling this fear… but also a sense of disarray from being caught in an infernal cycle that can't be stopped,” author Edouard Louis and philosopher Geoffroy de Lagasnerie wrote in the French daily Liberation.

France has seen a series of terror attacks over the past year and a half.

Last month, a truck massacre in Nice on Bastille Day was followed less than a fortnight later by the grisly murder of a priest near the northern city of Rouen.

Then on Wednesday in London, a knife attack by a Norwegian of Somali origin that left an American woman dead and five wounded was followed by hours of uncertainty over whether the assailant was a terrorist.

But police finally ruled out terrorism, concluding that he was mentally disturbed.

Several EU member states have joined the international military coalition fighting ISIS, which has pledged to use any and all means to vanquish Western unbelievers and “crusaders”.

In France, Prime Minister Manuel Valls repeatedly warns of new attacks, saying “new innocent victims” are likely after the bloody attacks the country has suffered over the past year and a half.

Jitters are heightened by warnings of attacks or announcements of foiled plots.

London recently warned of a possible attack in Britain, while Austria on Thursday said police had received emailed “terror threats”.

Late last month, Belgium charged a man with attempting to commit “terrorist murder” after police uncovered an alleged plot to launch an attack in the country.

Belgium suffered twin attacks on March 22 at the Brussels airport and the city's metro, which left 32 people dead.

The country has kept its terror alert at the third of four levels, meaning an attack is “possible and likely”.

In France, where a state of emergency has been renewed several times since it was first imposed after the November 2015 attacks in Paris claimed 130 lives, authorities regularly announce searches and arrests in their counter-terrorism drive.

A week after the Bastille Day truck rampage in Nice killed 85 revellers, a shooting at a shopping centre in Munich, Germany, left nine dead.

The reaction was a stark illustration of the reigning anxiety.

Social media lit up as people jumped to the conclusion that the perpetrators were jihadists, prompting German police to implore people not to spread rumours.

It turned out that the gunman, an 18-year-old German-Iranian, was a far-right xenophobe who was obsessed with violent video games and mass shootings – in particular the deadly rampage of Anders Behring Breivik in Norway five years ago.

All-news channels are increasingly seizing on any knife attack, even the most minor, interrupting regular programming to beam live images from the scene as if a new terror attack were under way.

In France, when a Moroccan man attacked a woman and her three daughters with a knife on July 19, several news outlets treated it as a possible terror attack.

As it turned out the assailant, who had psychiatric problems, had flown into a rage upon seeing the woman's husband scratch his genitals in front of her.

“There was no religious or ideological motive” the local prosecutor had to explain later.

“It's not the media that stokes panic, it's the panic that fuels the media,” said media expert Christian Delporte, adding that politicians were in a position of responsibility to appeal for calm.

He said the media can help dissipate fear by bringing people together.

“Everyone is in front of the TV, and being able to talk about it thanks to the media… is calming,” Delporte said.

Five young German women were arrested after organising a flash mob at a northeastern seaside resort that sparked a terror alert.

One person had pretended to be a celebrity and the rest chased after her, whooping and screaming as they tried to snap her, paparazzi-style.

The incident threw holidaymakers into a panic and a stampede ensued.

Meanwhile, in France on Friday Paris's Eiffel Tower was evacuated in error after an employee mistook a safety drill for a real incident.

“It was a safety exercise drill, the sort that is done dozens of times a week, which went wrong. One employee thought that it was a real threat and the Eiffel Tower was evacuated,” a police source said.