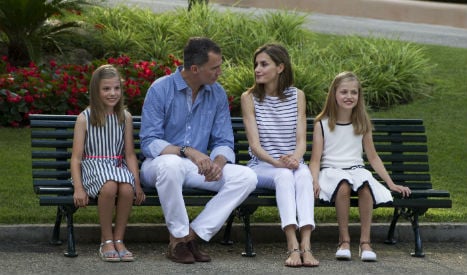 King Felipe VI was joined by Queen Letizia and their two daughters,  Crown Princess Leonor, 10, and Princess Sofía, 9, at the Marivent Palace on the island of Mallorca, where the family are spending their annual summer holiday. They strolled through the gardens at the summer palace striking natural poses for photos in the annual official photocall.

King Felipe had to interrupt his holiday earlier in the week, popping back to Madrid to meet with interim Prime Minister Mariano Rajoy and other party leaders as they struggle to break the political deadlock and form a government.

“It’s an unusual time,” admitted King Felipe, “But we have to adapt to what’s happening.” The King, who was crowned in June 2014 when his father King Juan Carlos abdicated, has continued the family tradition of spending holidays in Mallorca.

READ MORE: Mallorca voted one of world's best holiday destinations and here's why.

Earlier in the week the family was joined by King Juan Carlos and Queen Sofia, the King’s oldest sister, Elena and her two children Froilán and Victoria where they were pictured visitng a restaurant in Palma for dinner.

Absent from the royal party was the King’s other sister Cristina, who has been sideline from royal events since becoming embroiled in a fraud scandal centering on her husband Iñaki Urdangarin.

She became the first of Spain’s royal to stand trial earlier this year for tax fraud. A verdict is expected in the autumn.