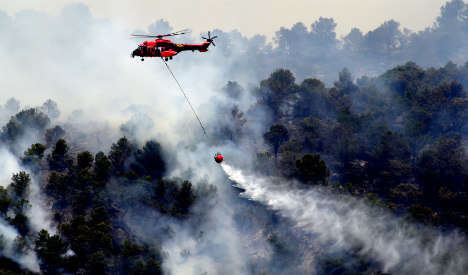 A 54-year-old firefighter died battling flames in the Jedey mountains on La Palma on Thursday.

Homes were evacuated in and around the town of El Paso as a wildfire raged out of control in the north of the Canary Island.

Around 700 residents were told to leave their homes and seek shelter in the sports centre at El Paso until the blaze was brought under control.

Watch a video of the wildfire:

Island authorities called for assistance in tackling the wildfire, which broke out at lunchtime on Wednesday and by Thursday morning and extra 67 firefighters and 32 vehicles, including water-dropping planes, were brought in from the mainland and neighbouring islands to help the 100 local workers control the blaze.

A 27-year-old German man was arrested by the CIvil Guard on suspicion of starting the fire, although it was not clear whether it had been a deliberate act of arson or accidental.

The blaze ravaged the Caldera de Taburiente National Park on the western-most island of the Spanish archipelago devouring ancient forest.