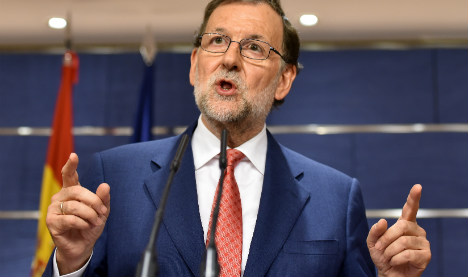 “If Mr Sanchez (Socialist party chief) continues to say no, we will go to repeat elections,” Rajoy, who is attempting to form a coalition or minority government following inconclusive June elections, told reporters.

Spain has been without a fully functioning government for more than seven months, leaving it in political limbo at a sensitive time as it needs to take urgent steps to reduce its deficit as well as address a growing separatist movement in the Catalonia region.

The blockage started after elections on December 20 failed to give any party an absolute parliamentary majority, as upstart groupings Ciudadanos and Podemos shook up Spain's long-established two-party system.

Efforts to forge a coalition were subsequently unsuccessful as rival parties were unable to overcome their differences, prompting repeat elections in June with a similar result.

He has since been tasked by the king to form a coalition or minority government, which he would have to push through a parliamentary vote of confidence.

But Pedro Sanchez, whose Socialist party came second in June elections with 85 seats and who has the power to block Rajoy, refuses to back him.

“We are not going to back something we want to change … the left will not back the right,” Sanchez told reporters after meeting Rajoy.

However Sanchez appeared to leave the door open for the possibility that the party would abstain in a vote of confidence, saying that the leadership committee would have the ultimate say in whether the grouping changes its posture or not.

Several high-ranking members of the Socialist party, including former prime minister Felipe Gonzalez, have pushed for an abstention to end the political paralysis.

Rajoy is due to meet Albert Rivera, the chief of centre-right upstart Ciudadanos, on Wednesday.

Rivera has said his party would be willing to abstain in the vote of confidence, but with just 32 seats, that would not be enough to push Rajoy's government proposal through.