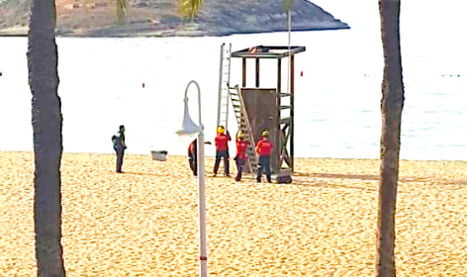 Not a great place to sleep off a hangover. Photo: micaaltv.jimdo.com

It appears that the unnamed British holidaymaker had climbed up onto the tower, which is used by lifeguards during the day to keep a watch over bathers.

His sleeping body was spotted by council workers just after dawn on Monday morning as a team went to clean the beach.

The failed to rouse him and called out the Local Police and fire brigade to assist. After struggling to wake him up, firefighters scaled the structure to retrieve the sleepy tourist from roof.

According to Majorca’s local paper Ultima Hora, the man “showed signs of inebriation and was unable to explain why or how he had got up there”.

His friend was found nearby passed out on the broadwalk.

Last summer saw British police patrol the notorious strip in the resort of Magaluf in the hope that it would help curb the worst of the behaviour by Brits abroad.

The tacky party resort has introduced a raft of by-laws in a bid to clean up its image.