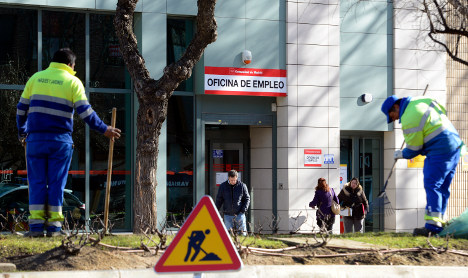 Unemployment is dropping, even if at 20 percent it still remains the second highest rate in the eurozone after Greece. Photo: AFP

But many others who left their country in search of work are still unable to return home due to Spain's sky-high unemployment.

Speaking just weeks after he finally returned, the 40-year-old said it had been difficult to live well and repay his mortgage with that amount of money. So he decided to leave for Germany.

He first worked for a laboratory near the Austrian border in the southeast, and then moved west near Switzerland.

Having now returned to Alcala de Henares near the Spanish capital with his wife and son, who was born in Germany, he manages a team of 15 people at a laboratory.

This rise up the career ladder would have been impossible had he not moved abroad, he says.

“I made progress in Germany,” he says, from a professional and salary standpoint.

“It helped to get a good job here.”

Andreu Domingo, an expert in international migration at Barcelona's Centre for Demographic Studies, told AFP that since 2008 when Spain plunged into financial crisis to 2015, “473,000 Spaniards have left.”

And the prospect that these may not come back, emptying the country of its young and qualified workers, is of huge concern in Spain.

But as the country emerges out of the crisis, with its economy growing at 3.2 percent last year — one of the fastest rates in the eurozone — some have decided to return.

According to Germany's Federal Statistical Office, the number of Spaniards arriving in the country — which had for years been on the rise — reversed its trend in 2014 just as Spain began its economic recovery and started dropping.

Meanwhile, the number of Spaniards leaving Germany is on the increase, it adds.

“A multitude of little things” — the language, being closer to family, quality of life — prompted Lag to come back, even if he was going to be paid less.

And he is not the only one.

Three friends in February created a platform called “Volvemos.org” (translated as “we are returning”) to help people like Lag connect with potential employers.

Since then, 4,600 migrants have contacted the website — engineers, architects, professors, researchers or sociologists currently living in a total of 86 countries attracted by Spain's improved outlook, says founder Raul Gil.

The government is predicting that Spain's economy will grow 2.9 percent this year, better than Germany and France.

And unemployment is also dropping, even if at 20 percent it still remains the second highest rate in the eurozone after Greece.

But Gil warns that “the return is often harder than leaving.”

While jobs are now being created, many are temporary, low quality and badly paid.

Gil's website has to discard 45 percent of all job offers it comes across, as the conditions are not deemed good enough.

Some 15 percent of all salaried employees in Spain now work part-time, and a quarter have temporary contracts.

Sonia Martinez, who returned to Valladolid in the north after a year spent in Kentucky in the United States, acknowledges that the work market in Spain is still difficult.

An economist, the 40-year-old returned to her post as an analyst in the public sector after taking unpaid leave, but says changing jobs would be a challenge.

By comparison, she had been offered several jobs in the United States, and ended up working in human resources.

“They appreciate the fact that you have a career, an MBA, that you're bilingual,” she said, refusing to exclude leaving Spain again.

Another drawback for those wanting to return is the salary level.

Gines says that on average, salaries have dropped 10 percent since 2012.

“Companies have trouble understanding that talented people are not going to come back at any price,” warns Gil.