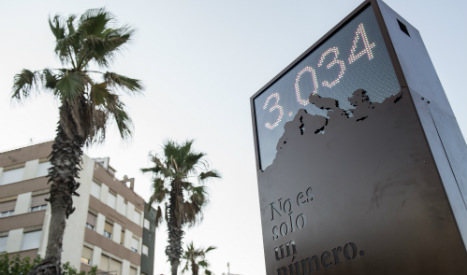 Not just a number. Photo: AFP

“We are inaugurating this shame counter which will update all known victims who drowned in the Mediterranean in real time,” said Mayor Ada Colau.

The monument consists of a large metal rectangular pillar that comes decked out with a digital counter above the inscription “This isn't just a number, these are people.”

The counter kicked off with 3,034 – the number of migrants and refugees who have died trying to cross the Mediterranean to Europe in 2016, according to the International Organization for Migration (IOM).

“We're here to look the Mediterranean in the face and look at this number – 3,034 people who drowned because they were not offered a safe passage,” said Colau, as swimmers took advantage of the last rays of sunshine nearby.

The fatality rate this year is higher than in the same period in 2015, the IOM said this week.

One reason for the higher death toll this year is that there have been a series of shipwrecks involving larger vessels carrying several hundred people rather than the more typical dinghies that carry a maximum of 100 migrants.

Syrians fleeing the country's brutal war again made up the largest group to have risked their lives to make the dangerous sea crossing so far this year.

Afghans were next on the list, followed by Iraqis.