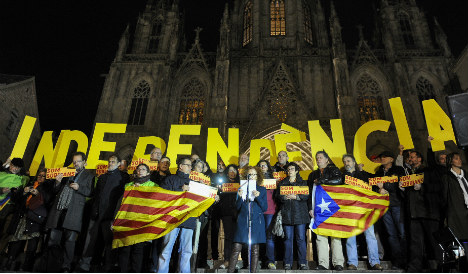 The text outlines the steps Catalonia — a northeastern region of 7.5 million people that is divided over splitting from Spain – needs to take to defend its right to auto-determination.

It argues the “only way possible” for Catalans to exercise their right to decide on their future is if the region “disconnects” from the Spanish state and disobeys Spanish institutions.

Pro-secession parties hold a slim majority in the 135-seat Catalan parliament and the text was approved with 72 votes in favour.

Spain's Constitutional Court warned last week that approval of the text would be illegal and the central government has consistently dismissed any secession plans as “nonsense”.

Spain's acting deputy prime minister Soraya Saenz de Santamaria said the government will table a motion at a cabinet meeting on Friday to take the result of the Catalan parliament vote to the Constitutional Court.

She said Prime Minister Mariano Rajoy had spoken to the leaders of Spain's main political parties so they can act “jointly” to defend the unity of Spain.

“The government said it would act, it has acted and it will act,” she added.

Spain has been without a fully-functioning government after two rounds of elections failed to give any party an absolute parliamentary majority.

It suspended an independence referendum called by the Catalan government in 2014 as well as a resolution passed by Catalonia's parliament in November declaring the start of a secession process.

Pro-independence parties in Catalonia won an absolute majority in the regional parliament for the first time in a September 2015 election which they billed as a proxy referendum on independence from Spain.

The main separatist “Together for Yes” alliance and the smaller, anti-capitalist CUP party won a combined 72 seats in the 135-seat parliament.

But their share of the vote was just 48 percent, giving their opponents a powerful argument against secession.

The two pro-independence camps have squabbled over economic policy and independence strategy. The more hardline CUP has long called for regionallawmakers and institutions to disobey Spanish courts.

The head of the regional government of Catalonia, Carles Puigdemont of the “Together for Yes” alliance, announced Wednesday that his government will face a confidence vote on September 28th, and that he would call fresh elections in the case of a defeat.

Many in Catalonia, which accounts for nearly a fifth of Spain's economic output and boasts its own language and customs, want autonomy from Madrid.