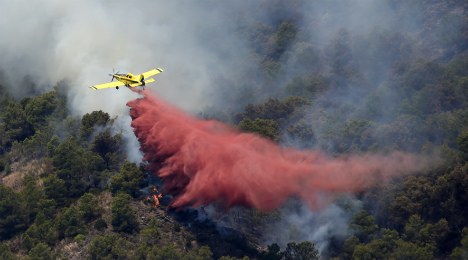 A plane fights a wildfire burning in Artana. Photo: AFP

The fire spread to the nature reserve after laying waste to some 1,400 hectares (3,500 acres) of land, regional authorities said.

The fire, whose cause was unclear, broke out on Monday at Artana, some 60 kilometres (40 miles) north of Valencia, an emergency services spokeswoman said, adding it had not spread to residential areas.

Overnight, the fire reached Sierra d'Espadan, an ecoregion known for its cork oak forests and home to foxes as well as endangered species of bats.

The local government sent in more than 300 people, including 130 soldiers, backed up with 27 planes and helicopters to try to keep the blaze from spreading as it encroached on the fringes of the reserve.

Spain's meteorological office says several regions are currently at high risk of wildfires owing to dry weather and soaring temperatures notably on the Mediterranean coast, the northwestern province of Galicia and Andalusia in the deep south.