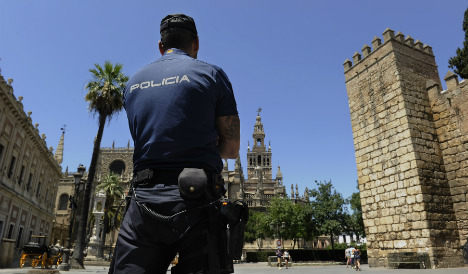 Spain’s tourist season is in full swing, one of its busiest ever due to the fact that holidaymakers are eschewing resorts in less secure countries such as Turkey and Egypt in favour for the relative safety of the Spanish costas.

“We remain vigilant in light of the call by Islamic State to cause harm to the powers involved in the international coalition,” anti-terrorism sources told Europa Press in a report published on Wednesday.

Security has been increased at key tourist sites across Spain, as well as on the country’s trains, where passengers have to put their bags through security scanners to check for firearms.

Security forces say that since October 2015, the so-called Islamic State has routinely issued calls to action in Spanish.

“If you do not have a gun, you have a rope or a knife. And before you you will find the soldiers of tyranny,” said Isis spokesman Abu Mohammad al-Adnani in a statement released in May. “We will kill any Spanish infidel.”

Security officials said they had detected threats against key sites in some of Spain’s main cities, although the threats remained “very generic”.

“Individual attacks against these complex objectives have a high failure rate, which is why jihadist propaganda encourages attacks on “soft targets” using accessible means such as running people over or using knives,” anti-terrorism expert Mario Toboso told Europa Press.

Such “soft targets” include holiday resorts, which right now in Spain are at almost full capacity in the middle of the peak season.

Following the terrorist attack in Nice on July 14th when a truck ploughed through crowds celebrating Bastille Day, Spanish authorities chose not to raise the terror alert but maintain it at 4 of a possible 5.

Spain has been on level 4 since June 2015, the highest since the Madrid train bombings in 2006, after a shooting attack at the beach resort of Sousse in Tunisia left 38 people dead.

Anti-terrorism experts say the typical profile of an attacker is someone with a history of mental illness. They are not necessarily religious; attackers in other European countries have drunk alcohol and not been observant Muslims.

Spain had the second highest number of jihadist arrests in 2015, with 187, according to Europol. France had the most, with 424, the United Kingdom had 134 and Germany, 40.

On Wednesday morning two brothers were arrested in Girona, Catalonia for helping to finance the so-called Islamic State.

Madrid was the scene of Europe’s most deadly terror attack when an Al-Qaeda-inspired terrorist cell bombed commuter trains on the morning of March 11th 2004, killing 191 people and injuring more than 2,000.