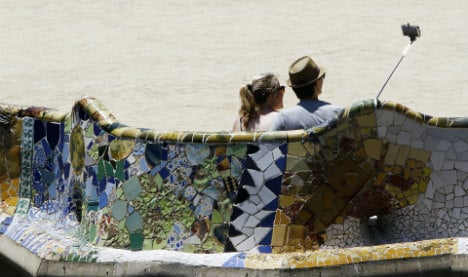 Escape the crowds of tourists for some more relaxed locations in the city. Photo: Quique Garcia / AFP
No one can deny that Barcelona is enchanting. From its whimsical Gaudi architecture to its near perfect weather and its sandy stretch of city beach it’s easy to see why it is one of Europe's fastest-growing destinations.
Nowadays, however, it seems everyone is in the know, and at times the crowds of fellow visitors can put a damper on your Barcelona experience.
Here are some local hacks from the Devour Barcelona team for escaping the crowds and finding peaceful safe havens for those precious authentic moments.
1. Visit one of Barcelona’s lesser known foodie markets Mercat de la Concepció. Photo: sensac/Flickr
If you have begun your search for things to do in Barcelona, you will have no doubt stumbled across the famous La Boqueria food market. But truth be told, you will have a much more pleasant – and much more authentic – experience seeking out some of Barcelona’s lesser known (but equally awesome) food markets.
Visit Mercat de la Concepció whose building dates back to 1888, making it one of the oldest markets in Barcelona. Today it’s best known for its 24 hour flower market – perfect for a midnight bouquet. Another lesser-known market is the Mercat de la Llibertat, which was partially designed by Antonio Gaudí’s righthand-man, Francesc Berenguer. Also consider paying a visit to the newly renovated Mercat del Ninot which is just a stone’s throw from Passeig de Gracia, right in the center of the city, but tucked away from the crowds.
2. Head up to Montjuic Take a cable car up to Montjuic- Photo: Patrick Down/Flickr
The quickest possible way to escape from the hustle and bustle of the city center is to head to the top of one of Barcelona’s hills, Montjuic. Jump in a cable car right in the centre of the city at the Parallel metro station and enjoy the ride to the top. Once you are there, visit Montjüic Castle – an impressive fortification dating back to the 17th century, then explore Barcelona’s Historic Botanical gardens – perhaps the best kept secret in Barcelona and an absolute oasis during the hot summer months.
3. Sip something on Barcelona’s roof terrace bars The rooftop bar at the Hotel Pulitzer. Photo: Conor Devries.
What better way to escape from the crowds than to literally rise above them? Barcelona has a range of fabulous rooftop bars with views of famous monuments, the ocean, and unspoilt 360 degree views of the city. Check out some of our favorite hotel terraces, like the popular Hotel Barceló Raval, Duquesa de Cardona, Grand Central Hotel and Hotel Pulitzer.
Top ten: Barcelona's coolest rooftop bars
To totally avoid the crowds head somewhere a little more unknown like La Terraza de Vila Emilia, the hidden gem of Barcelona’s rooftops. It’s very quaint with an intimate vibe (so much so that bookings are recommended!) and you can enjoy live music and barbeques on Thursday and Saturday nights.
4. Explore Barcelona’s old villages Explore the streets of the Sarriá neighbourhood. Photo: Oh-Barcelona.com/Flickr
As Barcelona's expansion project (the Eixample) grew and grew in the mid 19th and early 20th centuries, the small villages surrounding the city were swallowed up along with it. Gracia and Sarriá were  two old villages of Barcelona which nowadays are simply just neighbourhoods of the city, and mostly importantly, wonderful places to explore away from the crowds!
Sarriá is a gorgeous neighborhood with cobbled lanes and low houses, as well as some great, locals-only tapas bars (head to Bar Tomás for delicious patatas bravas!), as well as being the launchpad for the funicular which takes you to the top of Mount Tibidabo, a hill that borders the west of the city.
And Gràcia, known for retaining its village-like charm, is the perfect place to explore the local shops, bars and restaurants in the area. In fact, our Grácia Neighborhood Food Tour, a 4-hour delicious exploration of the Gràcia neighborhood, is a fantastic way to explore the local area, try our favorite Catalan bites, and meet the hard working families behind them.
5. Visit the Catalan wine country Visit a Catalan vineyard. Photo: Angela Llop/Flickr
We can’t help but admit that we love the fact that Barcelona is so close Catalonia’s nearby winemaking regions – some of the world’s top rated vineyards are located a mere 90 minutes from the Catalan capital! There are many options for joining a wine tour departing from Barcelona, otherwise there are some great options which are easily accessible from the city.
A great idea is to visit Sant Sadurni d’Anoia, a village in the Penedés winemaking region. The village is famous for making cava, Catalonia’s own sparking wine, and the well-known winemakers Freixenet´s winery is located right next to the train station. Otherwise to find Barcelona’s hidden wineries head north of the city, where you will find them nestled around the small and utterly charming town of Alella.
Devour Spain was founded by Spanish food lovers as a way to connect hungry travellers with the local, family run businesses that make amazing food. Offering award-winning fun and delicious food tours and tapas tours in Malaga, Seville, Barcelona and Madrid.
Follow them on Instagram, Pinterest, Facebook and Twitter for Spanish food news, tips and recipes.