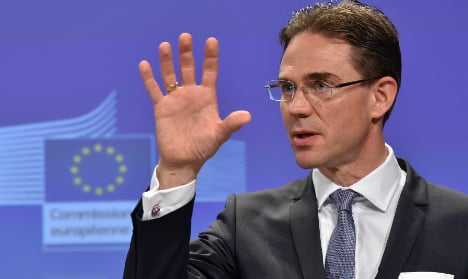 The penalties would be the first time Brussels has wielded its disciplinary powers over member states' budgets, in a move that has inflamed tensions over its power.

European Commission vice president Jyrki Katainen said “socio-economic factors,” including the Iberian countries' high rates of unemployment, should be taken into account when deciding how much to suspend.

Attached to the letter was a list of 12 Portuguese funds and 60 Spanish that could be suspended, either completely or in part.

Structural funds are used to address regional disparities within the bloc.

Earlier this month, eurozone finance ministers found Portugal and Spain had not taken “effective action” to rein in their deficits, which remain larger than EU rules allow after years of painful austerity.

Germany's Finance Minister Wolfgang Schaeuble urged the Commission to propose the complete or partial suspension of structural funds for projects in 2017 as a penalty.

The EU's executive branch could also hand down huge fines that could reach up to 0.2 percent of their GDP. A source, who asked not to be named, said that is expected to be decided by July 27.

The penalties have inflamed tensions in the EU at a time when politicians are seeking more political unity after Britain's surprise vote to leave the bloc.

Portuguese Prime Minister Antonio Costa hit out against the plans on Saturday, saying: “There is no justification for imposing sanctions for not reaching a target in 2015, when the European Commission itself recognises that we will reach this year's goal.”

Portugal is aiming for a budget deficit of under three percent of GDP, down from 4.4 percent last year.

Spain, which has been in political deadlock since December, reported a deficit of 5.1 percent of GDP in 2015, way off the target of 4.2 percent set by the Commission.