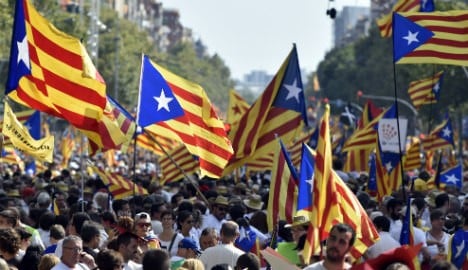 Pro-independence supporters in the northeastern region of Catalonia are more numerous than those wanting to remain a part of Spain for the first time ever, new figures from the region’s centre for sociological research show.

The percentage on Catalans who want the region to break away from Spain is now 47.7 percent, compared to 42.4 percent of people who want to remain part of Spain.

In the last survey, in March 2016, pro and anti-independence sides were roughly even, with 45 percent each and in 2015, the majority of Catalans (50 percent) were against breaking away from Spain, compared to pro-independence (42.9 percent).

The latest survey was carried out between June 28th and July 13th just after Spain’s second general election in the space of six months highlighted the different voting patterns in Catalonia compared to the rest of the country.

Left-wing party Podemos won in Catalonia, whereas the conservative Popular Party (PP) gained the majority of the vote elsewhere in the country.

This stark contrast in the political leanings of Catalonia compared to the rest of the country could be a reason for the sudden surge in support for pro-independence parties.

But despite these encouraging figures for supporters of Catalan independence, the path has not run smoothly for the campaign.

Pro-independence parties struggled to cling onto their absolute majority in parliament in the June elections and more widely in the region, Catalans – even those who back secession – are becoming tired of the ongoing political infighting and the fight for independence that has been dragging on for years.

The anti-capitalist CUP party, which is in the pro-independence coalition, refused to back the regional government’s budget in early June.

The development dealt a blow to the coalition's planned 18-month roadmap for independence from Spain by 2017, which it announced after winning a parliamentary majority in regional elections last September.

Without a budget the head of the Catalan regional government, Carles Puigdemont, is not able to take steps to put the roadmap in place, such as setting up a tax system and state structure for Catalonia.

He has called a parliamentary vote of no confidence for September, which could trigger fresh elections if it goes through – the fourth since 2010.

Spain's economic downturn, meanwhile, prompted renewed debate over how Catalonia – a region with its own widely spoken language and distinct culture – is funded by the central government in Madrid which collects most taxes.

Many Catalan nationalists argue the region pays out more than it receives.

Separatists have for years lobbied for an independence referendum like the one held in Scotland in 2014, which resulted in a vote to remain in the United Kingdom, a move that has been strenuously blocked by Madrid.

In November 2014 the region held a symbolic independence vote after Prime Minister Mariano Rajoy's PP government blocked it from holding an official referendum.