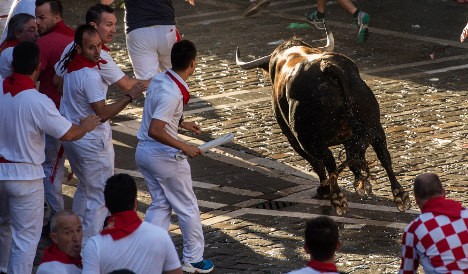 The assault happened during the running of the bulls in Pamplona. Photo: AFP

The 26-year-old punched a man who grabbed his girlfriend’s waist and tried to kiss her against her will during the famous San Fermin festival on July 13th, 2014.

The incident occurred at 8.37am, when the drunk 43-year-old resident of Pamplona approached the young American woman while she was leaning against a wall waiting for her boyfriend, who had just taken part in a bull run.

He approached the woman and asked her if she wanted to go for a drink. She declined and said that she was waiting for her boyfriend.

The man left her but returned soon after and, according to the prosecution, “started stroking her hair, put his hands around her waist and tried to kiss her”. The woman pleaded with him to stop, but he continued, even though “she was crying and trembling”.

She shouted out the name of her boyfriend, who, when he arrived and saw his girlfriend was in distress, “pounced on the man”.

He punched him in the face, causing the man to fall to the ground, where he hit his head and was knocked unconscious.

The man suffered a severe head injury, which required emergency surgery. He spent 28 days in hospital and was incapacitated for a further 221 days, according to the court report.

The man from Pamplona received a one year suspended sentence for the sexual assualt and was ordered to pay his victim €3,000 for “moral damage”.

The American man, on the other hand, was served with a much larger fine: he was ordered to pay the attacker €91,500 (€16,000 for the injury and €75,000 for its consequences) and pay Navarra’s Health Service €60,430 for the costs of the medical assistance received by the attacker.

The annual San Fermin festival has hit the headlines in recent years for the spates of sexual assaults that take place during the nine day event.

At this year's festival, protesters took to the streets to raise awareness of the issue.

Two days before the end of the festival, 15 men had been arrested for sexual assault.