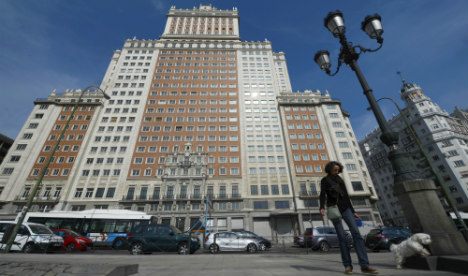 Wanda acquired the 25-storey Edificio España, built in the 1950s under the dictatorship of General Francisco Franco, in June 2014 for €265 million euros (now $292 million) and wanted to turn it into a hotel and shopping centre.

It had reportedly planned to knock down the facade, re-model the interior and build it again with the same materials, but Madrid's left-wing town hall – elected last year – refused to allow this.

According to the source, who wished to remain anonymous, Spanish investment group Baraka made an offer for the building above the 265 million euros Wanda paid for it.

The source refused to say exactly how much Baraka had offered to pay, but added that both groups had reached an agreement on the sale, which according to El Pais daily will not be finalised until September.

Both Baraka and property consultants JLL, tasked with selling the building, refused to comment when contacted by AFP.

Hugely imposing, the skyscraper dominates one end of the Plaza de España square in western Madrid and while it was a prized architectural jewel during Franco's brutal rule, residents of the capital are hugely attached to a building few associate with the dictator.

It has stood empty since 2006 — a symbol of the 2008 real estate collapse that thrust Spain into a damaging economic crisis.

Wanda, owned by one of China's richest men Wang Jianlin, has been on a high-profile overseas acquisition spree in recent years, such as the $3.5-billion purchase of Hollywood studio Legendary Entertainment in January.

It burst into the international spotlight in 2012 by buying US cinema chain AMC Entertainment for $2.6 billion.