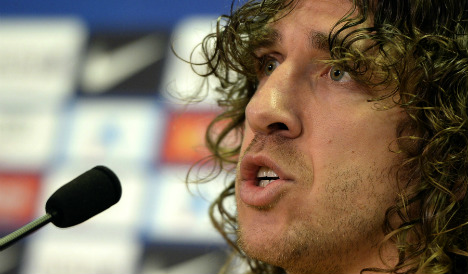 Carles Puyol has been criticized on social media. Photo: AFP

“I’m the ex-captain of Barcelona FC. I’ve won six leagues, three Champions Leagues, a World Cup and a European Cup…” the player says in the advert to promote La Liga on Chinese TV.

Some are using social media to accuse Puyol of being a “traitor” to his Catalan roots, while others leapt to the defence of one of Spain’s most legendary footballers and his, factual, statement.

“Puyol is a traitor,” wrote one Twitter user. “Take the money and damn Catalonia.”

“Embarrassing, Carlos Puyol, I thought you loved your people more than money,” wrote another person on Twitter.

Many other fans came to the former player's defence, however.

Barcelona FC launched a campaign supporting its star player following the verdict, encouraging fans to use the hashtag #WeAreAllLeoMessi.

He was not the only person to point out the apparent injustice in Barcelona FC supporting Messi after his conviction for tax fraud and keeping quiet on the insults levelled at Puyol:

“Amazing that Barça doesn't defend Puyol against the insults for saying he's Spanish, and creates a campaign when Messi defrauds the tax office,” wrote another Twitter user.

For his part, Puyol, an active user of social media, has kept quiet on the subject.

It is not the first time tensions have flared between Catalan nationalists and their fellow Spanish citizens.

In the run-up to Euro 2016, two female fans of Spain's national team were attacked and branded “Spanish whores” after setting up a supporters' stand in Barcelona.

In early July a Spanish singer complained on social media when a waiter on an Ibiza ferry did not understand his order, given in Catalan. The incident went viral on social media, with Catalan nationalists berating the waiter, while others spoke out in his defence.