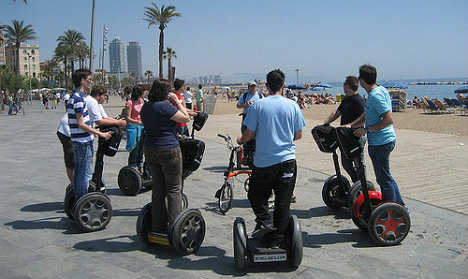 The emergency ban, which specifically targets Segways, has been put in place by the city council in a bid to rid the beachside promenade of annoying tour groups buzzing around in one the Catalan capital’s busiest areas.

It prohibits the use of Segways between the W Hotel and Olympic Port until the end of the summer season on October 1st.

Riders caught in the no-go area will face on the spot fine of €90 rising to up to €1,125 for those caught riding “in a dangerous or inconsiderate fashion”, such as breaking the 10 km/h speed limit.

Mercedes Vidal, the mobility councillor for BarcelonaCity, said the ban had been imposed as an emergency measure to decongest the area while city wide regulations concerning such vehicles could be drawn up.

“We’re dealing with the fact that it’s an incredibly dense city, with an added high touristic pressure,” she told La Vanguardia.

“Technology has progressed much more quickly than any possible regulations cities could introduce,” she said adding that although a host of complaints had been lodged against Segways, only one actual accident involving one had been reported.

The popularity of Segway tours, which provide sightseers with  quick and easy way to travel round the main tourists hotspots, has rocketed in the last few years.

The seafront Segway ban is just the latest measure under Barcelona left-wing mayor Ada Colau to control tourism in a city which attracts 27 million visitors a year.

Since Colau was elected mayor in May, 2015, the city has introduced a moratorium on new hotel beds, imposed restrictions on private lettings such as Airbnb and restricted bar crawls and licencing regulations in a bid to reduce street noise.

Tour groups have been banned from the bustling La Boqueria market and with so many cruise ships docking in its port the city is even considering imposing a tourism tax on day trippers.

Locals complain that the city is being ruined by tourism with so many apartments being turned over to tourist accommodation that locals have been priced out.