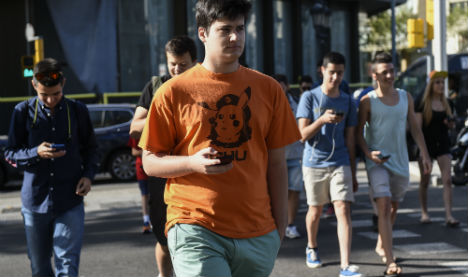 Spanish users can now download the app for free on iOS and Android phones and take to the real life streets to hunt for the virtual monsters.

The game has already caused havoc sine being first released in the US, Australia and parts of Asia earlier this month with police forces the world over having to issue warnings about the dangers of the game.

For example, a driver in the US crashed into a tree yesterday while playing it.

The game was launched in Germany on Wednesday, prompting authorities at Berlin’s Holocaust Memorial to ask players not to hunt there.

It was available in the UK from Thursday and has now been rolled out to Spain and Italy and Portugal.

Gamers can now hunt for Pokémon across Spain, at their nearest  park, on the beach and even during their daily commute.

Churches, cemetaries and world heritage sites in Spain have already reported being inundated with gamers, which according to the game's in-built map are excellent places to find and capture rare Pokémon.

One gamer quipped: “My mother spend 15 years trying to get me to go to church, Pokémon GO succeeded in just two days. There was a Pikachu.”

The game has proved an instant global success making an estimated $1.6 million a day from iPhone users in the US alone, and Nintendo's shares have rocketed by almost 50 per cent in the last week.