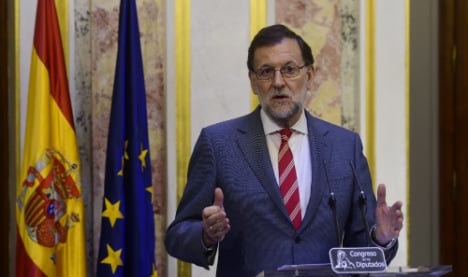 Although the victory margin was wider than in a December vote, the conservative party still failed to achieve an absolute majority in the 350-seat parliament.

Pedro Sanchez, the leader of Spain's Socialist Party, which came in second with 85 seats, reiterated that his group would not back a PP government.

“Right now the Popular Party has no support,” he told a news conference after his meeting with Rajoy.

New anti-austerity party Podemos, which came third with 71 seats, also said it would vote against Rajoy.

Ciudadanos, an upstart party and natural ally of the PP which finished fourth with 32 seats, said it would abstain from voting in a parliamentary vote of confidence.

Podemos opposes the steep spending cuts the PP put in place to rein in Spain's public deficit while Ciudadanos rejects Rajoy's party because of corruption scandals that have tainted its reputation.

Small regional conservative parties in the northern Basque Country and the northeastern region of Catalonia — which have in the past supported minority PP governments — have also refused to back Rajoy.

Their refusal follows years of conflict with Rajoy, whom they accuse of trampling on minority language rights and blocking their efforts to defend local cultures.

Parliament's newly-elected lawmakers will take their seats next week. King Felipe VI will then consult party leaders to nominate one to try to form a government.

The leader selected by the king will need the support of a majority of lawmakers in the assembly in a first parliamentary vote of confidence or of more votes in favour than against in a second vote – a lower threshold that allows a candidate to get through if parties abstain from voting.

“If Rajoy gives up his place, you would have a government tomorrow,” a senior Socialist official joked in a conversation with AFP.

Rajoy has headed a caretaker government with limited powers since the general election on December 20th which resulted in a hung parliament, after which parties failed to agree on a coalition, prompting the repeat vote.

The PP argues it has legitimacy to govern because it has 52 more seats than its nearest rivals the Socialists, and won an additional 14 seats in the repeat polls.

A member of Rajoy's entourage said the Socialists' initial refusal to back the PP was “political liturgy” and predicted the party's position would probably evolve.

Rajoy on Wednesday sent other parties his proposal for a government programme.

“It is a moderate programme and is open to dialogue,” he said.

The text appears to open the door to reforms long demanded by the left and Ciudadanos, especially in education policy, the fight against corruption and taxation.

Asked if the Socialists would abstain during a parliament vote of confidence if the PP managed to form an alliance with other formations,

Sanchez hinted at a possible yes.

“The Socialist Party will be part of the solution,” he said.

The political limbo has so far not have had much impact on Spain's economy, the eurozone's fourth largest, but the country is facing pressing challenges that need to be addressed.

The country must now draw up a programme to reduce its deficit to win leniency from the European Commission – a task that could be beyond a caretaker government.