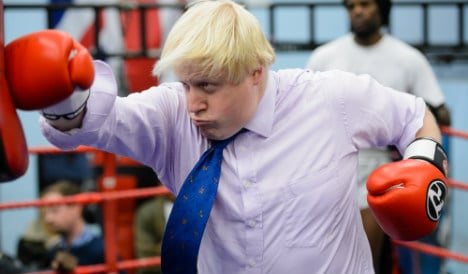 Boris won't pull any punches when it comes to Gibraltar. Photo: AFP

The appointment of a politician infamous for his lack of diplomacy to the post of Foreign Secretary has simultaneously produced groans and guffaws the world over.

While in France he was branded “a liar with his back to the wall” by his counterpart, Germany appeared bemused at the pick of a “reckless con artist”.

However Spain appeared more focused on issues closer to home, namely how the new foreign secretary might greet Spain’s proposals for shared sovereignty over Gibraltar, that perennial thorn in the side of bilateral relations between Britain and Spain.

Barely had Britain woken up to the news of the shock referendum result last month before Spain’s foreign minister José Manuel García-Margallo had proffered his assistance.

Spain would work with Britain on a co-sovereignty agreement “to solve the situation of Gibraltar and allow it to keep its access to the EU's single market,” Margallo said on Friday June 24th while Europe was still reeling from the Brexit win. Johnson may not yet have had time to outline his specific plans for office but, when it comes to Gibraltar, his stance has already been made very clear.

He dedicated the entirety of his weekly column in the Daily Telegraph to the issue at the height of border tensions between Spain and Gibraltar in the summer of 2013. And his standpoint was unequivocable.

Under the headline ‘The Spanish must take their hands off Gibraltar’s throat’ the then mayor of London accused Spain of returning to a “Franco-style blockade” and of using the Rock “to divert attention from its own economic woes”.

He said “there are those who think I am mad to stick up for Gibraltar… Why, say the sceptics, should we care about a rocky relic of empire? Why are we allowing this colonial anachronism to poison our relations with Spain – a country that is not only a good friend and EU partner, but which for decades now has been a liberal democracy?”

Recounting his own visit to the tiny territory 30 years before, he answered that Gibraltar should be defended against Spain because, like the Falkland Islanders, its residents have “an overwhelming desire to be British”.

In a message that may yet be one we hear repeated often when it comes to diplomatic relations with Spain over the issue of Gibraltar, Johnson said: “Madrid should be in no doubt as to the strength of British determination”.

Gibraltar may hold Johnson responsible, at least in part, for the success of the Brexit campaign, to which a whopping 96 percent of Gibraltarians voted against, but they can be confident that they have a fierce defender who will pull no punches when it comes to dealing with Margallo.

Unless he changes his mind that is…