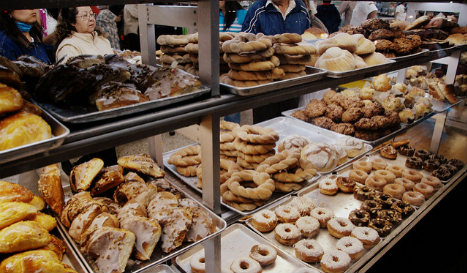 The women were sacked after eating a snack that was about to be binned. Photo: LWYang/Flickr

María Ángeles García and Patricia Román were fired from their jobs at the supermarket on June 6th for eating a bakery snack worth 15 cents that was about to go out of date and be binned.

The two women worked in the supermarket chain in the town of Jerez de la Frontera in Cádiz, southern Spain.

Exhausted and nearing the end of their shifts, a colleague on the bakery section of the supermarket offered the women two “small bites” that “were about to go out of date” and would “only be thrown in the bin”.

García and Román ate the snacks, but were seen by a manager who called them into her office.

The two women – both single mothers – were then sacked from their jobs at the supermarket for “serious professional misconduct”, despite paying for the food the next day after they had been disciplined.

García, who has worked for the supermarket chain for 16 years, has been protesting her dismissal outside the doors of the Mercadona branch where she worked.

For Román, who has worked at the store for six years, the weeks following her sacking have been difficult.

“I’m divorced and I have two children aged 16 and 11 who depend on me,” she told regional newspaper La Voz del Sur.

Francisco Cuevas of the CNT union told Spanish media that this behaviour is typical of Mercadona, adding that there have been several similar cases in recent years.

“It’s nothing more than an excuse used by the company to fire them, it’s a common practice in Mercadona, which has a record of sentences for bullying,” he said.

After the women’s story went viral in Spain, Mercadona responded on Tuesday morning by offering them compensation, admitting that they were “unfairly dismissed”, a move that was welcomed by local CNT secretary Cuevas:

“This happened because the workers were willing to fight and were brave enough to make a stand at the door. Unfortunately, there are thousands of workers who are fired in similar circumstances who do not have the courage to do so.”

PARTNER CONTENT
Have you tried these weird and wonderful British foods?