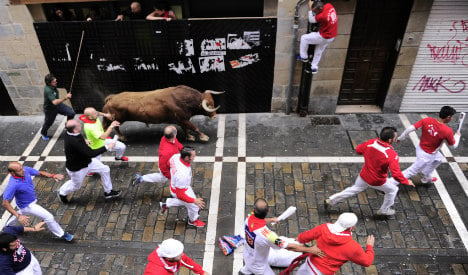 The 39-year-old painter from New Jersey spoke to The Local from his hospital bed in Pamplona just hours after receiving the injury during the penultimate run of the annual San Fermin festival.

“I’ve feeling alright,” he said. “All in all it’s been one of the experiences of my life.”

He described the moment that the half-tonne animal, a fighting bull named ‘Ilustrado’, charged into him on the approach to the Town Hall Square.

“I was running and I got caught up in some human traffic, I turned and saw the bull heading towards me and I just thought ‘run faster, get out of the way’, I had about three four strides to get away but I guess I didn’t get out of the way quickly enough.”

As he tried to reach the safety of the barrier the bull caught him and pierced his left thigh.

“I knew I had been punctured but at that moment the adrenalin was so great that it didn’t really hurt as much as it should have done. I didn’t realize it was so bad,” he said.

Watch the moment of the goring:

He was pulled under the barrier to safety and treated by Red Cross medics at the scene before being transferred by ambulance to hospital.

“I’ve got around 20 stitches in me. It’s going to leave quite a scar,” he said proudly.

Doctors have told him that he could be discharged within 24 hours. “I really hope so, because there is still a day left of the fiesta and with an injury like this comes a bit of fame. I’d like to be able to recount my experience.”


Enjoying the fiesta in Pamplona before taking part in the running of the bulls. Photo: Matthew Lavine

He insists that he will return one day to run again.

“I’m not going to let this put me off. I’ve had an amazing time at San Fermin and running with the bulls was one of the greatest experiences I’ve had in my life. I’d love to come back and run again,” he said.

“I came knowing that if you run with the bulls you can get gored and I thought about it a thousand times before deciding to do it. I knew it could happen and it did happen. And I’m lucky that I can walk away from it.”