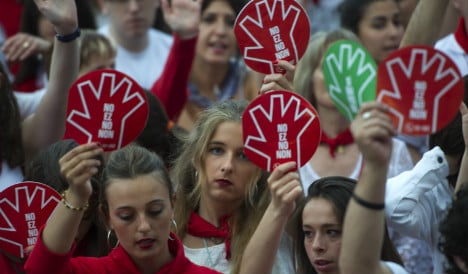 Protesters hold up signs reading "No is no". Photo: AFP

The nine-day festival, which began on July 6th and ends on Thursday, mixes concerts, daily bull runs and round-the-clock drinking.

It has become infamous for reports of sexual assaults, including men groping women's breasts at the opening party known as the “Chupinazo”.

Pamplona city officials have in recent years launched various initiatives to curb such assaults at the fiesta, which was immortalised in Ernest Hemingway's 1926 novel “The Sun Also Rises”.

Police have received 15 complaints of assault so far this year, including six for “sexual aggression” which under Spain's penal code includes rape. The other complaints were for the lesser charge of “sexual abuse”.

A total of 15 men were arrested, city hall said in a statement.

Two of the suspects have since been released without charge and one of the complaints has been shelved.

A 22-year-old French woman filed a complaint with police for rape on Saturday. According to Spanish media reports she was attacked in the bathroom of a car park.

A 19-year-old woman told police she had been raped in the early hours of Thursday in the doorway of a building in central Pamplona by five men who filmed the attack with a mobile phone.

Five men have been arrested in connection with that assault.

They held their hands up in a “stop” gesture or carried red signs reading “No is no”.