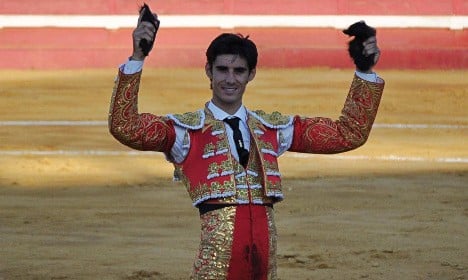 Victor Barrio made his corrida debut in 2008 and toured rings all over the country. Photo: Facebook

The death of Spanish bullfighter Víctor Barrio, who was gored on Saturday, has provoked a flood of comments on social media, many defending the bull, with some people even saying that the matador deserved his fate.

Barrio, 29, was struck in the chest by the 500kg bull, Lorenzo, who tossed him in the air before he fell to the ground, where he lay motionless after the graphic attack that was aired live on television.

He is the first bullfighter killed in the ring in thirty years and his death in Teruel in the eastern region of Aragon has sparked renewed calls for the practice to be banned in Spain.

Now one bullfighting association has decided to take legal action against people who have made negative comments about Barrio’s death on social media, collecting more than 50 comments made on different social networks.

The Lidia Bullfighting Foundation (Fundación del Toro de Lidia), an association that promotes and defends bullfighting, on Monday confirmed that it was taking legal action against those who had posted “deplorable messages” on social media that “attacked the memory of Víctor Barrio.

In a statement released on Monday the foundation said that many of the tweets and Facebook comments it had collected constituted “real cases of libel, which are punishable by up to 14 months in prison.”

The foundation confirmed that it had reported the comments to police for “libel, slander and hate crimes”.

It encouraged bullfighting fans to report any “despicable” comments they see on social media and the foundation’s lawyers would “take the necessary action”.

The foundation has also requested institutional protection from Spain’s Ombudsman, as well as its Culture, Justice and Interior Ministry, to “guarantee the compliance of the law and respect for the world of bullfighting, its professionals and its aficionados”.

Spain's Civil Guard confirmed on Tuesday that they would be investigating the offending posts.

“Of course the Civil Guard will investigate these tweets,” confirmed Arsenio Fernandez de Mesa, the director general of the Civil Guard, speaking in Santander on Tuesday.
Anyone can have an opinion on whether or not they support bullfighting but it is not acceptable to make comments that incite hatred and to use social networks to insult and offend people,” he said.

“A bullfighter has died. One torturer less, today the planet is a bit cleaner of so much shit,” wrote one Twitter user.

“A bullfighter has died. One killer less,” commented another Twitter user.