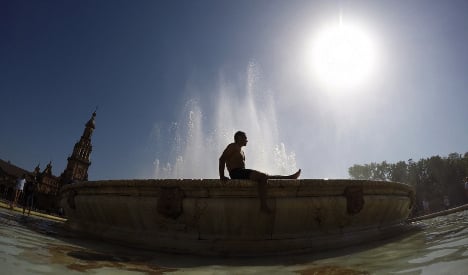 A man sits on the edge of a fountain at the Plaza de España square in Seville. Photo: Cristina Quicler/AFP.

Spanish weather service AEMET warned on Monday morning that most of the country would be facing very hot weather, placing 22 provinces within eight communities on alert.

Southern Spain in particular is set for a scorcher of a day with Córdoba, Seville, Jaén, as well as Valencia placed on orange alert, or “significant risk” for heat.

AEMET predicted that Córdoba would see highs of 41C, while Granada and Seville were set to see the mercury reaching 39C.

Murcia, Toledo, Madrid and Girona were set to experience highs between 36C and 38C.

By later in the morning, AEMET had reduced the alerts for some of Spain’s provinces, showing that more western areas would not see as much heat.