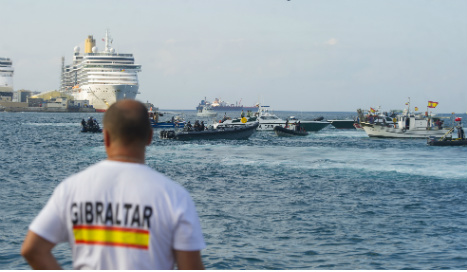 A stand off between RGP and Guardia Civil in summer 2013. Photo: AFP

Ambassador Simon Manley was summoned to Spain’s foreign office on Monday afternoon by Ignacio Ybáñez to hear the official complaint over an incident in waters off Gibraltar last Friday.

Spain complained that a Royal Gibraltar Police vessel had approached a Spanish Guardia Civil patrol twice at great speed and only diverted to avoid a collision at the last moment.

“The RGP patrol boat, which was sailing at a high speed, diverted just a few metres from the Spanish boat causing a big wave that unsettled the Spanish police vessel,” Spain's Foreign Ministry said in a statement.

“Its irresponsible and reckless manoeuvre created a significant, clear and sudden risk for the safety of both official boats and their crew.”

Spain's secretary of state for foreign affairs asked Britain's ambassador to ensure Britain takes “appropriate measures so these types of behaviours are not repeated”.

In response the British Embassy stated: “Safety at sea is one of our top priorities. The Royal Gibraltar Police vessel attempted to make contact with the Spanish vessel and maintained a safe distance at all times.”

The RGP denied that they had in any way acted irresponsibly.

“The RGP denies the version of events as described, with the encounter occurring approximately 150 metres off Catalan Bay on the day in question,” said the RGP statement given to The Local.

“At the time, the RGP vessel approached the Guardia Civil vessel and maintained a safe distance at all times whilst attempting to make contact with the crew of establishing their intentions.”

The protest is just the latest in a long standing diplomatic spat fuelled by incidents in British Gibraltar Territorial Waters which have seen ambassadors from both sides called in to hear complaints.

In recent years there have been hundreds of so called ‘illegal incursions’ by Spanish vessels in British Gibraltar Territorial Waters resulting in repeated official complaints from London to Madrid.

Diplomatic tensions over the tiny territory at the foot of southern Spain flared up during the summer of 2013 when Spain began imposing stringent checks at the border that led to lengthy queues both in and out of Gibraltar, in apparent retaliation at Gibraltar sinking an artificial reef off its coast.

Spain ceded Gibraltar to Britain under the 1713 Treaty of Utrecht, but still claims sovereignty and refuses to recognize its right to territorial waters.

A spokesman at the British Embassy insisted: “We are confident of UK sovereignty over BGTW in international law. The Royal Navy challenges all Spanish State vessels whenever they make maritime incursions into BGTW.

“Incursions are an unacceptable violation of British sovereignty. We formally protest all incursions with the Spanish Government. We will continue to use a range of proportionate diplomatic and naval responses to incidents.”

The Brexit vote is a blow for Gibraltar, whose population voted overwhelmingly to remain within the EU.

The tiny territory of Gibraltar with its 33,000 population relies heavily upon workers living in Spain, supplies imported from Spain and its ability to trade to within the European single market.

Spain has said that co-sovereignty offers the best solution in a Brexit scenario, a move which Gibraltar has rejected out of hand.