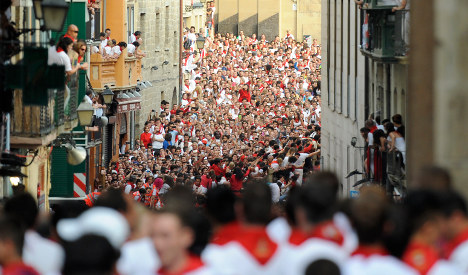 Spain’s national police are investigating a sexual assault reported by a 22-year-old French woman on Saturday during the final weekend of the running of the bulls in Pamplona, according to El Pais.

The woman reported to police that she had been raped by an unknown man while she visited the toilet in the underground car park in the central Plaza del Castillo.

Several people came to help her and take her to an information point for victims of sexual assault.

Police are now searching for a man based on the description from the victim.

Another three suspects were arrested in connection to other sexual attacks. A fourth person was also arrested for injuring the friend of a woman, who tried to defend her from the suspect’s advances.

On the first night of the festival, an 18-year-old woman was attacked and raped by five men from Seville, who were placed on remand in prison at the weekend after it was discovered that they had even recorded the attack. They also stole the woman’s cell phone, according to a court statement.

One of the five was a recent Civil Guard graduate, who has now been temporarily suspended.

Since the first attack, at least four other cases of sexual assault have been reported. One of those cases involved a man molesting a female uniformed officer while she was responding to an incident.

Another person who reported sexual assault to police was a man who said he woke up to find another man performing a sexual act on him, El Pais reported.

The city of Pamplona has been particularly focused on preventing sexual crimes at this year’s traditional San Fermin bull-running festivals, organizing a special campaign to raise awareness and inform victims about their resources.

One particular concern is how the event is often depicted through souvenirs and other promotional materials, using images of women baring their breasts and being groped by sometimes dozens of men.

“The goal of our campaign is to take back public spaces for women, and to tell people that our bodies are not part of the party – our bodies are our own,” campaign organizer Pilar Mayo told The Local last week.

More police have been deployed this year, dark areas have been given more lighting and high-definition cameras have been posted to better identify perpetrators.