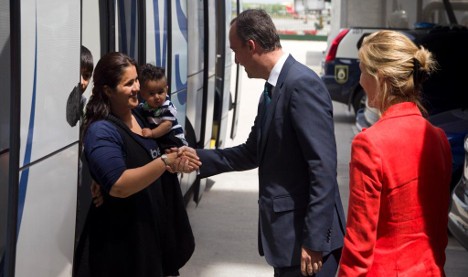 The Spanish Secretary of State Security and the Secretary General of Immigration and Emigration greet refugees newly arrived in Madrid in May 2016. Photo: Spanish Interior Ministry.

The Council of Ministers is meeting on Friday to approve the criteria for distributing €1.75 million to the country's autonomous communities for helping refugees.

Since the EU agreed on a plan to share in the responsibility of caring for refugees under a redistribution and quota system, the Spanish government has been criticized for dragging its feet in meeting its promises.

The UN refugee agency said in April that Spain needed to take a “greater responsibility” after its government had agreed to take in some 15,000 refugees from overwhelmed Greece and Italy: In the first six months after the agreement, Spain took in just 18 people.

More recently the government has tried to speed up the process, pledging that it would be able to bring in 586 refugees by the end of June. But according to Europa Press, the country has taken in just 305.

Meanwhile the Spanish public has tried to put pressure on the government to do more. And a survey in May found that Spaniards were among the most accepting of refugees worldwide with a high of 97 percent of Spanish respondents saying that they would “personally accept people fleeing war or persecution” into their country, according to Amnesty International.

A report in June revealed that there are actually more asylum seekers in Spain from Venezuela than from Syria.