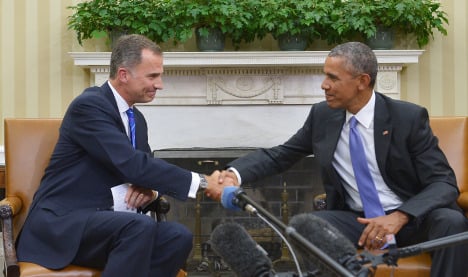 Spanish King Felipe VI is set to meet Obama at the airport on Saturday in what will be the first official visit by a US President to the Iberian country in 15 years.

Obama’s stop in Spain is part of a European trip during which he will also attend a Nato summit in Poland.

In Seville, the American leader is set to take a tour of the historic city where New World colonizer Christopher Columbus is buried, according to Spanish news agency Europa Press. Obama will also visit US troops at the Rota naval base in Cádiz.

On Monday, Obama will meet with acting Prime Minister Mariano Rajoy, and the King will host a royal palace lunch for Obama, along with leaders from Spain’s major political parties, according to ABC.

There’s been some speculation as to whether Obama will pop up north to Pamplona for the San Fermin running of the bulls festival, which kicked off on Wednesday.

A White House spokesperson said last month that the president was interested in attending the fiesta made internationally popular by Ernest Hemingway’s novel The Sun Also Rises. Some San Fermin revellers were already ready for an Obama visit, as pictured below.

And Obama will just miss First Lady Michelle Obama and their daughters Sasha and Malia, who visited Madrid last week as part of the Let Girls Learn educational initiative.

King Felipe and Queen Letizia made their own trip to the US and the White House last year.


The Spanish royals met with the Obamas on September 16th 2015. Photo: Casa Real