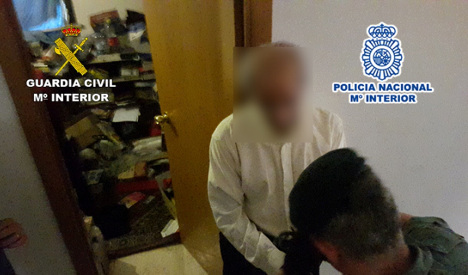 The father being arrested after the son was freed by police. Photo: Spanish Civil Guard.

Spanish police freed a 19-year-old young man in Rivas-Vaciamadrid, Madrid, who had been trapped inside of a room in his own home by his father for two years, the Civil Guard reported on Wednesday.

Officers were first alerted to the case involving the family with British citizenship, according to ABC newspaper, after the victim managed to send an email crying for help to a special police unit that handles domestic abuse.

In the email, the young man sounded desperate, according to ABC: “Rescue. Assistance. Help me. I am desperate. My father abuses me. I am held prisoner. Please, do not get in touch with me because he would kill me.”

He then provided police with the phone number and email of his sister, who was able to confirm the situation to investigators.

Officers from both the National Police and Civil Guard then worked together on the case and obtained a warrant to investigate the family’s house, which was protected by barriers of metal bars, aluminum strips and wood.

Inside, police found the 19-year-old “extremely thin, disoriented” and with signs of psychological abuse as well as physical beatings by his father. He was also very malnourished and dehydrated.

ABC reported that the young man was like “a skeleton with skin” and weighed only 43 kilos at a height of 1.80 metres (weighing 95 pounds at 5 feet 9 inches tall).

The son was then taken into the care of medical services.

The father meanwhile violently resisted police before he was arrested for illegal detention.

The son told police that his father would beat him on a daily basis and also barely gave him enough food or water to survive, forcing him to stay in the same room of the house all day.

The rest of the house was filled with numerous broken, unusable furniture and bags of garbage, making it difficult to move around.

Police reported that the father appeared to have problems getting along with his neighbours due to his “strange obsessions and possible mental illness.” He apparently believed that the neighbours were poisoning him through the water and were producing dangerous radiation, while he also believed he was being targeted by the Russian mafia.

Not the first instance of familial abuse

According to Spanish media, this was not the first time the father had locked up members of his family.

ABC reported that the victim was the only son of the family of five with British nationality, including his mother and two sisters aged 20 and 16.

Three years ago, the father had also locked up everyone in the house, but his wife and three children were able to escape by contacting a neighbour.

20minutos reports that the father was tried at the time for domestic violence, but had not gone to prison.

But while the women of the family, who had long been abused, moved into a shelter, the son decided to go back to live with his father for a while.

The abuse against him began once the others had left and it is not known whether the other family members knew what was happening to the son, according to ABC.

He has now been reunited with his sisters and his mother.