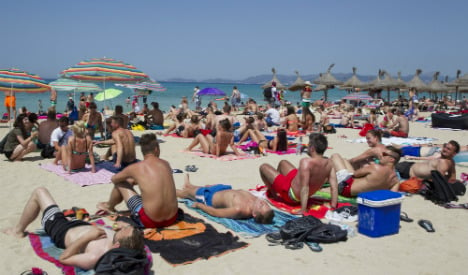 A beach in Mallorca. Photo: AFP

“Tourist go home”. The slogan daubed on a wall in the centre of Palma, the capital of Spain's holiday island of Mallorca, points to growing frustration with a rising tide of tourists.

The largest island in the Balearic archipelago in the Mediterranean, which is home to one million people, expects to receive over 10 million visitors this year – a new record.

The crowds have been so large that French tourist Mathilde Boudet, who visited Mallorca and its neighbouring island Menorca with her partner last month, found access to a popular cove closed off by police.

“We weren't expecting that,” the 32-year-old said.

Spain is enjoying a surge in tourism in part as fears over terrorism drive wary travellers away from rival sunshine destinations in North Africa and Turkey and back to former favourites in southern Europe.

But the rise in visitors has led to grumbling from locals in tourist hotspots like Palma who complain of soaring property prices and rents even as they welcome the jobs they help create.

The discomfort was reflected in graffiti messages which appeared in April in the historical heart of Palma which were quickly cleaned up by municipal workers. “Tourism is destroying our city” was among the slogans spray painted on city walls along with “Tourist go home, refugees welcome”.

The island has long been a popular beach destination, especially with visitors from Britain and Germany who favour all-inclusive package holidays and arrive on low-cost flights.

Many foreigners move to Mallorca, drawn by its cove beaches and mild weather.

A small apartment can fetch hundreds of thousands of euros. An old fisherman's house that was converted to a luxury triplex is listed for €577,500 ($642,665).

But despite the complaints from locals over rising real estate prices, Galindo said the graffiti was “an isolated case”.

In the central La Seu neighbourhood, home to Palma's main monuments such as its imposing cathedral that dominates the city's palm-lined waterfront, residents want the arrival of cruise ships to be more evenly spread out.

The ships, which are avoiding Tunisia and Turkey due to terrorist attacks, can pump thousands of tourists into the city for just a few hours, said Luis Clar, who heads the La Seu neighbours association.

“There is a percentage, which is not yet very high but which exists, of people who question the effects of tourism,” said Biel Barcelo, the tourism minister in the regional government of the Balearic islands.

The left-wing government in charge of the archipelago since 2015 began charging in July a tourism tax of up to two euros for overnight stays which is expected to bring in €60 million per year.

The money will be used for environmental projects and to restore historical sights.

Local green group GOB feels the tax is not enough. They fear rising tourism is putting too much pressure on natural resources, like water, and demand a limit on the number of tourist lodgings.

There are 230,000 hotel beds available in Mallorca, according to industry figures.

But this does not count beds available through home rental sites such as Airbnb “contributing to a sense of saturation, which has grown in the past two years,” said GOB spokeswoman Margalida Ramis.

Mallorca has become “Barcelona's granddaughter”, she added in a reference to Spain's second-largest city which has struggled to deal with the effects of a visitor boom.

Barcelona mayor Ada Colau in July 2015 halted the issue of new hotel licences for one year and has introduced hefty fines for illegal rental of apartments to tourists.