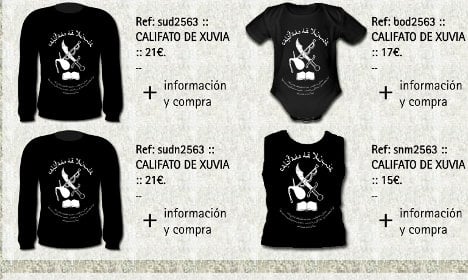 None of the items are believed to have been sold by online store RPG-7. Image: Screenshot from RPG-7.

Among the items for sale in the Califato de Xuvia (Califate of Rain) range were T-shirts for children and even bodysuits for babies.

None of the items are believed to have been sold, but the man had clearly committed the crime of glorifying terrorism by posting the items online, state prosecutors said in a preliminary report.

On the former soldier’s Facebook page, the man identified by authorities as Octavio C. T., described himself as the “voice of God” and as “the Aiatola de Xuvía [the Ayatollah of Rain] and the supreme interpreter of the Word of God in the region [of Galicia]”.

“God the Father destroy everything, death to the State, down with the impious constitution, cursed are the unbelievers. Loyalty to the Caliphate,” he wrote in another post.

The defendant is set to appear in court on Thursday, Spanish online news site 20 minutos reported.