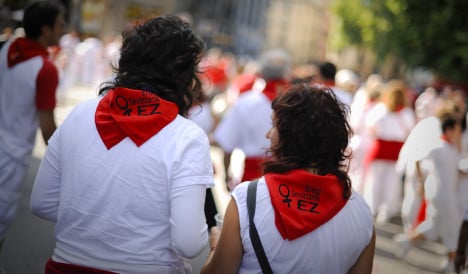 The city has launched a campaign against sexual aggression using the phrase “no means no”, as well as providing a guide in multiple languages.

One of the issues that the city is trying to fight is what happens during the opening chupinazo (rocket launch) event at noon. Often women are hoisted onto the shoulders of men in the crowd and photos of some women lifting their shirts or even being openly groped by dozens of men have been used to promote the event on souvenirs, or in commercial material.

“You should know that despite all the excitement and emotion of the Chupinazo opening event, it is not tolerable to strip off, touch up anybody or even say some indecent comments amid all the partying,” the city’s guide in English reads.

“This kind of behavior would be unacceptable in any place and at any time, but in the fiesta conditions when communal partying is going on all over the place, it is even more important to show maximum respect to all and especially to the fairer sex.”

The number of sexual crimes during the San Fermin festival is hard to know as women's groups say many victims don't report them to police. Organizer Pilar Mayo, who is helping lead the campaign against sexual assaults, told The Local she knew of at least three cases of sexual assault last year.

La Vanguardia reports that there were five cases reported in 2014 and ten in 2013.

“The goal of our campaign is to take back public spaces for women, and to tell people that our bodies are not part of the party – our bodies are our own,” Mayo told The Local.

In 2008, a woman was killed by a man whom she had refused to have sex with.

A rape case reported last year during the festivities drew national attention and citywide protests after a woman reported that she was raped by a man when she went to the bathroom, and the man’s friends stood by laughing.

This year the city is deploying more police than normal and for the opening event, Pamplona is using high-definition cameras to catch assaults on film and identify aggressors.

Officials have also created a map of the “black points,” or vulnerable areas where they have put in better lighting and will have more officers on patrol.

There is also a designated Information Point at the Plaza del Castillo in the city centre with a 24-hour phone to use with emergency numbers provided.

The regional government of Navarra also offers a 24-hour service, reached through dialing 112, which provides treatment for sexual abuse as well as a free women’s legal aid service.

Pamplona recommends that if you are a victim of sexual assault at the festival, go to the nearest hospital to ask for a medical and gynecological exam – without changing clothes or washing up. Police will also accompany you to a hospital if you go to them first.

The city also tells victims to be careful not to get rid of any potential evidence which could help an investigation. You can download the full guidebook in English here.