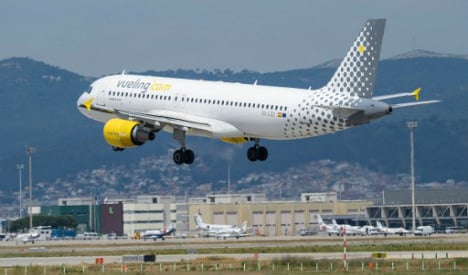 The airline, part of part of British Airways and Iberia's parent group IAG, said it cancelled 66 flights on Tuesday because of a strike by French air traffic controllers.

All but two of the flights that were cancelled were set to arrive or depart from airports in France, including Orly and Charles de Gaulle in Paris.

Vueling is not the only low-cost airline that says it has been affected by the strike by French air traffic controllers.

Irish no-frills airline Ryanair said it had to cancel 102 flights on Tuesday in France and called on the European Commission to take action.

“Over 18,000 Ryanair customers will have their flights and holidays cancelled,” it said in a statement.

But French authorities said turnout for the strike was low and they had not asked airlines to reduce their flights because of the strike.

Problems with Vueling flights began on Thursday, coinciding with the start of the summer vacation for many passengers going through Barcelona's El Prat airport, the airline's base.

Vueling has blamed unspecified “operational difficulties” for the delays of over 12 hours and cancellations of dozens of flights since Thursday, in addition to the strike by French air traffic controllers.

But a union representing flight crew and the Spanish government say the airline is to blame for the travel disruption, arguing it had expanded the number of flights for the summer without providing enough means to follow through.

“It is a problem of planning by the company,” Economy and Tourism Minister Luis de Guindos said during an interview with Onda Cero radio.

“I hope Vueling will quickly present an action plan to prevent this from repeating itself,” he added.

Spain's public works ministry said on Monday Vueling faces an inquiry and a possible fine over its handling of the travel chaos.

Public Works Minister Ana Pastor warned that an airline that repeatedly cancels flights could have its permanent licence replaced by a temporary one.

Vueling has announced it would hire around 30 more pilots and rent six extra planes to boost its capacity.

The company has not said how many passengers have been affected but Spanish media estimate over 8,000 people have seen their travel plans disrupted between Thursday and Sunday alone.

Angry passengers have staged loud protests at the airline's check-in and information desks at El Prat, demanding that their fares be reimbursed.

Extra police were called in to the airport over the weekend to keep order.

The airline, founded in 2004, transported 24.8 million passengers last year. It accounted for nearly 37 percent of all passenger traffic at Barcelona's El Prat airport.