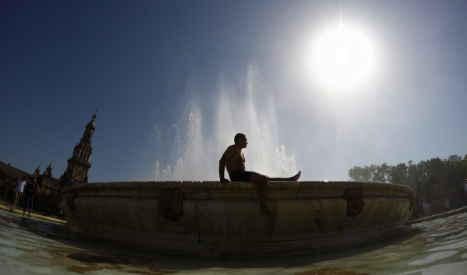 A man cooling off by a fountain in Seville. Photo: AFP

Spain’s national weather agency, Aemet, placed 17 of the country’s provinces on alert for high temperatures or risk of storms on Monday, as temperatures soared across Spain. The provinces of Huesca, Zaragoza and Lleida are on alert for temperatures that could exceed 36C as well as storms, while the provinces on alert for stormy weather are: Ávila, Burgos, León, Palencia, Salamanca, Segovia, Soria, Valladolid, Zamora, Girona, Lleida, Navarra, Cáceres and La Rioja.

They are on a yellow alert, which means there is a “risk” of extreme weather occurring. Spain’s Mediterranean coast is set to enjoy cloudless skies this week, while clouds will move in from the northwestern region of Galicia, Aemet reports.

In the Canary Islands, there will be clouds in the north with the risk of light rain.