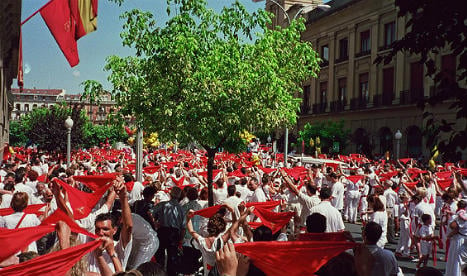 For a week between July 7th and 14th every summer, Pamplona begins each morning with an exhilarating race where hundreds of people run through the town ahead of  magnificent bulls. With concerts, performances, bullfights, dancing, merrymaking – and of course, drinking – over a 10 day stretch, San Fermín is one of Spain’s most famous festivals, drawing about one million people to Pamplona each year.

READ MORE: The Survivors' guide to running with the bulls. With carnival processions, dancing, and medieval plays, head over to Guadalajara to enjoy a leap back in time for the Medieval Theatre Festival this summer. Since 1978, this festival has been one of the world’s most popular for folk and Celtic music lovers. The line-up includes famous artists as well as newcomers every year, and offers you photography displays, craft fairs, dance workshops for free! Thousands of people flock to Granada for recitals, matinee concerts, and symphony orchestras in historic churches, buildings, and gardens across the city. The festival even includes ballet and flamenco nights. A unique cultural experience, this festival is a medley of performances, workshops, and visual art displays in over 20 theatres and other locations in the city of Almagro. For 250 years, the coastal town of Villajoyosa has been commemorating Santa Marta (its patron saint) who, according to legend, rescued the townsfolk from a Moorish invasion in 1538. With a majestic procession, firework displays, open-air dancing, and a re-enactment of the Moor-Christian battle, don’t miss the festivities in Villajoyosa this July. Every year, two million locals and tourists – whether gay, straight, or bi – come together for the biggest pride festival in Europe. Madrid Orgullo this year is sure to be one of the best yet, with a huge parade, performances, contests, and fiestas throughout the weekend. Highlights include the now classic stiletto race and the competition for the coveted title of Mr Gay Pride 2016. For those interested in visual arts, PhotoEspaña is an incredible opportunity to see internationally renowned photographers display their latest projects, videos, and developments in photography. This popular contest isn’t just for sailing enthusiasts. Head over to Valencia’s sun-kissed beaches this July to enjoy the regattas. For nature lovers – and anyone who enjoys a walk through Spain’s stunning landscapes – La Palma is the perfect hiking destination. Throughout the first weekend of July, there are a series of guided routes designed to show you La Palma’s most beautiful terrains. Every Thursday night during July and the beginning of August, this Madrid racecourse offers you a chance to spend your evening enjoying nocturnal horse races.