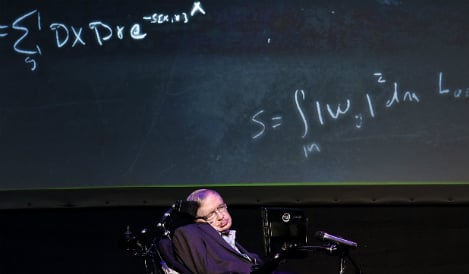 Hawking was guest speaker at the Starmus festival on Tenerife attracting thousands of physics buffs to the festival, which began on Wednesday.

But among them was a woman who, according to police on the island, has persistently stalked the 74 year-old astrophysicist for several years bombarding him with hundreds of messages on Twitter and via email, according to a report in La Opinión de Tenerife

But on his arrival in Tenerife, the hate messages intensified with the woman allegedly sending him dozens within just a few hours. It then emerged that she had travelled to the Canary Islands to coincide with Hawking’s visit.

Among the messages were “I am going to kill you” and “I’m next to you and can kill you”. The alarm was raised by one of Hawking’s sons who monitored his social media accounts and recognized the woman as a repeat sender of abusive messages and who seemed to be mentally unhinged.

As a result Hawking took to the stage on Wednesday flanked by an armed police guard where he gave his presentation surrounded by internationally renowned researchers in physics, chemistry, medicine and economics.

The theoretical physics professor went on to say that humans will not survive another thousand years on Earth, given the fragility of the planet.

Hawking urged governments and public institutions to invest in space research to give mankind options to live elsewhere in the universe should the Earth finally come to an end.

Hawking also warned that mankind could eventually be threatened by artificial intelligence.

“I don’t think that advances in artificial intelligence will necessarily be benign,” he said. “Once machines reach the critical stage of being able to evolve themselves, we cannot predict whether their goals will be the same as ours.”