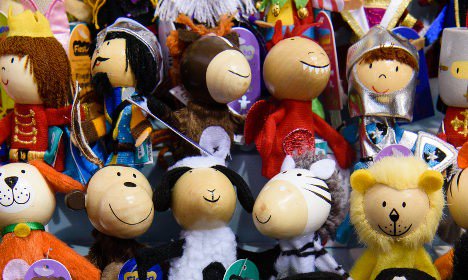 The court said on Tuesday that there was insufficient evidence the two puppeteers had committed an offence.

The puppeteers, Alfonso Lazaro de la Torre and Raul Garcia Perez, had been under investigation after a February performance in which they displayed a sign that read “Gora Alka-Eta”, which combines the “Gora Eta (Long Live Eta)” chant of the separatist group with the made-up word alka, to create a slogan that sounds like “Long Live Al-Qaeda”.

Since the investigation was launched in February by the Audiencia Nacional, which handles terror-related cases, the pair have been under strict conditions; their passports were confiscated and they have had to check in every day with a court.

The pair were arrested and spent five days in jail after over a puppet show held during carnival festivities in Madrid which also featured the rape of a nun and a judge being hanged, shocking parents attending with their children.

But many politicians came out against their detention on charges of “glorifying terrorism”, arguing it went too far and struck a blow against freedom of expression.

The controversy shook Madrid's town hall, with AVT, a Spanish support group for terrorism victims, filing a complaint against Mayor Manuela Carmena, the two artists from the “Puppets from Below” company and another city hall official who deals with culture.

Spain suffered from decades of bloodshed as the Eta group sought independence for the northern Basque Country, killing more than 800 people over 40 years before renouncing violence four years ago.

Al-Qaeda-inspired bombers have also struck the country, killing 191 people when they blew up packed commuter trains in Madrid in 2004.

In a press conference, Carmena apologised for the show, although she acknowledged there was “some incomprehension as to why measures were taken against these theatre actors and puppeteers which are of surprising gravity.”

Amnesty International, meanwhile, asked that the charges against the puppeteers be dropped altogether, arguing that the strict probation conditions were “unjustified.”

“A play, however inadequate the content may seem, does not endanger security,” said Esteban Beltran, head of Amnesty Spain.

Authorities should “only sanction expressions that directly incite others to commit terrorist acts, as several UN rapporteurs have cautioned.

“The (UN) Human Rights Committee has also urged Spain to define its terrorism offence in a restrictive manner and limit its application to behaviours of a terrorist nature, so that we don't have to witness how the right to freedom of expression is restricted,” said Amnesty.