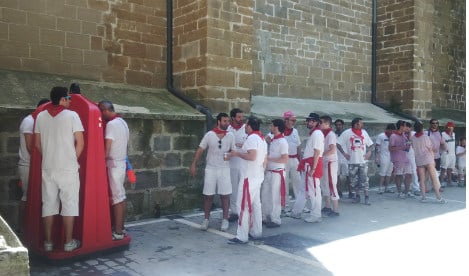 Men queue up for a portable urinal. But not all bother to wait in line. Photo: Fiona Govan

The council is intending to coat the walls of the Navarra capital with urine-repellent paint that sends streams of pee splashing back towards the piddler.

“As a result of the repellent, the stream of urine rebounds from the surface and soaks the trousers and shoes of those who decide to relieve themselves in a public place,” a city council spokesman told The Local.

“It’s a special kind of hydrophobic paint and is invisible to the eye but wil be painted on the lower part of the walls in the key problem areas during the fiesta”. Each year, from the start of San Fermin on July 6th until the close of the fiesta eight days later, the narrow cobbled streets of the old city are a tide of white-clad, red neckerchief wearing revellers dedicated to dancing, singing, eating and drinking… with the inevitable consequence.

By dawn each morning the puddles of urine and piss-drenched walls emanate an unhealthy stench, made worse throughout the day if the hot summer sun shines down.

Previous efforts by the council to clampdown on public urination have included boosting the provision of portaloos and portable urinals and imposing fines on those caught relieving themselves in the open air. With so many crowding in for the fiesta, it can be hard to find a toilet. Photo: AFP

Last year, 76 people were caught and fined by local police for the offence being handed penalties of €300 (halved if the fine is paid quickly).

The council said that street urination not only costs authorities an estimated €10,000 to clean up during the fiesta, but creates a very bad impression on visitors.

The scheme was pioneered in Hamburg's St Pauli district to deter the hundreds of thousands of partygoers that flock to the partygoing district each year and relieve their bladders.