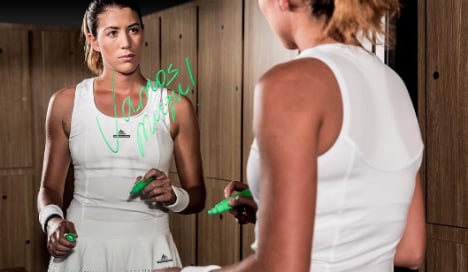 Raphael Nadal´s Wimbledon no-show has left the stage open for another Spaniard to take the limelight. She won her first match on Monday and is Spain's major hope in the competition. But just who is Garbiñe Muguruza?

Hailed as “the new face of women’s tennis”, Spanish-Venezuelan player Garbiñe Muguruza could be the one to watch during this year’s Wimbledon Championships where she is the number two seed. The future tennis star was born on October 8th 1993 in Caracas to a Spanish father and a Venezuelan mother.

She started playing tennis aged three and moved back to Spain aged six to train at the Bruguera Tennis Academy near Barcelona, run by two-time French Open winner, Sergi Bruguera.

She currently lives in Geneva, Switzerland.

Muguruza turned professional in 2012 and by the 2014 season had reached the quarter finals of the French Open, her first major quarterfinals after a shock win over world number one and defending champion, Serena Wiliams, who also happens to be Muguruza’s tennis idol.

She reached her second major quarterfinal in 2015, again at the French Open, and was runner up at the 2015 Wimbledon Championships, losing out to the woman who was increasingly becoming her tennis nemesis – Serena Williams.

She won her first tournament at the 2015 China Open, the biggest title of her career so far.

Muguruza got the chance to hit back at Williams in the 2016 French Open, when she beat the defending champion, cementing her position as one of the top players in women’s tennis. Muguruza’s star is set to rise even higher when she represents Spain at the Rio Olympics this summer; she is particularly popular in South America because her mother is Venezuelan.

US-based sports business magazine SportsPro named Muguruza as the 14th most marketable athlete in the world over the next three years, and the tennis player already has several high profile deals, such as being the face of Stella McCartney’s Adidas range. At 22, Muguruza appeals to a younger crowd and is a keen user of social media; she regularly updates her Instagram page and even has her own app, Garbinesapp, where she live streams video, answers fan questions and shares photos and thoughts from her everyday life.