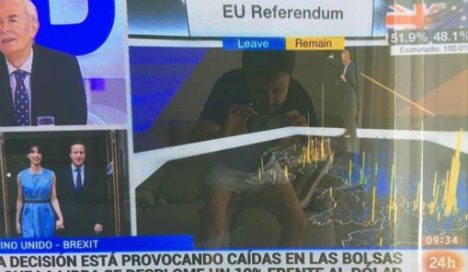 Oops! Asier Antona accidentally uploaded a photo of himself in his underwear onto Facebook. Photo: El Brusko/Twitter

The president of the conservative Popular Party for the Canary Islands was left embarrassed after he uploaded a photo to Facebook, not realizing that his reflection was visible in the television… and all he was wearing was his underpants.

Asier Antona uploaded a photo of a TV screen showing the results of the British referendum to leave the EU onto his Facebook and Twitter accounts, but failed to notice that his reflection was clearly visible.

Antona deleted the photo when he realized his mistake, but not before hundreds of social media users had taken screen shots, which they continued to share.

But the PP chief took the embarrassing incident in good humour, uploading a second photo – this time showing a reflection of him wearing trousers.

“With trousers… Glad that such a tumultuous day did not make us lose our sense of humour.”