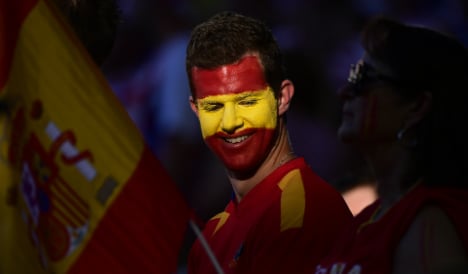 Vicente del Bosque's Spain face a monumental challenge as they target a record third consecutive European Championship title, starting with a repeat of the Euro 2012 final in Paris.

After finishing second in Group D, Spain find themselves on the same side of the draw as world champions Germany and hosts France – both of whom advanced to the last eight on Sunday.

Spain thrashed Italy 4-0 in the final four years ago and the Azzurri arrived in France without high expectations, but Del Bosque insists they still pose a formidable threat.

“We have a lot of respect for a very strong team like Italy. They are just as much favourites as we are,” he said.

“It will be a very open, hard, demanding game for the team, but hopefully we can continue in the Euros with aspirations to get to the final.”

Spain striker Alvaro Morata is the competition's joint-top scorer on three goals and La Roja have won all seven of their knockout ties under Del Bosque at the Euros and World Cup.

However, Italy coach Antonio Conte urged his players to defy the odds.

“Nothing is impossible, otherwise everything would be too easy. It would be a shame to give up every time the odds are against you.”

Italy will be without Antonio Candreva because of a groin injury, with Alessandro Florenzi likely to replace him on the right side of midfield.

Chance of a lifetime

England were spared the tricky assignment of facing Cristiano Ronaldo's Portugal when Iceland grabbed a last-gasp winner against Austria in their final group stage match.

Iceland's population of 330,000 makes them the smallest nation ever to have qualified for a major tournament and they approach the game in Nice as massive underdogs.

But the pressure is on Rooney and his team-mates to avoid falling prey to a side that twice defeated the Netherlands in qualifying before holding Portugal in their opening game in Group F.

“For me it's no different, whether it's Portugal or Iceland we have to go out and win the game,” said the England captain.

“It'll be a different kind of game, but it will be as difficult as facing Portugal. We're not going into this game showing a lack of respect for Iceland. We're showing full respect.”

Iceland joint-coach Heimir Hallgrimsson said the game represents the opportunity of a lifetime for his players.

“If we beat England, their lives will change forever, and significantly. Icelandic football will go up in reputation and the way we approach football will be different,” he said.

“But whichever way this goes, these players are winners already.”

The winner of Monday's tie will move on to play France in Paris next Sunday for a place in the semi-finals.