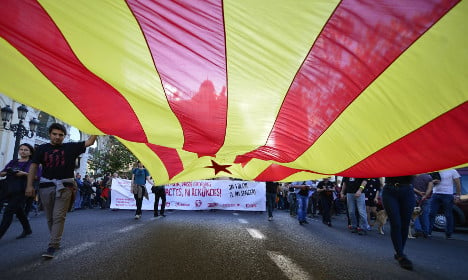 Separatists in the northeastern Spanish region of Catalonia have for years lobbied for an independence referendum. Photo: AFP

“While Scotland prepares to discuss a second referendum with the EU, we should say without fear that the time for OUR referendum has also arrived,” Mr Jordi Sanchez, president of the Catalan National Assembly, a pro-independence organisation, tweeted.

Separatists in the northeastern Spanish region of Catalonia have for years lobbied for an independence referendum like the one held in Scotland in 2014, which resulted in a vote to remain in the United Kingdom.

Earlier on Friday, Scotland's First Minister Nicola Sturgeon said a second independence vote was “on the table” after Britain voted by a narrow margin in a referendum to leave the European Union.

While the vote was close across Britain, Scotland “clearly and decisively voted to remain part of the European Union, 62 to 38 (per cent)”, she told the BBC.

The head of the pro-independence government of Catalonia, Mr Carles Puigdemont – one of the few Spanish politicians to be critical of the “Remain” campaign in Britain – praised the British referendum.

“Democracy won, because the British people were able to vote,” he said after the results of the Brexit vote were announced.

Spain is going to the polls on Sunday in a repeat general election following an inconclusive December vote in which no party gained a majority.

The issue of whether to allow Catalonia to hold a referendum on independence was one of the stumbling blocks preventing parties from forming a subsequent coalition government.

New anti-austerity party Podemos backs a referendum, which is fiercely opposed by the Socialist party, its natural ally, as well as the two other main parties, the conservative Popular Party (PP) and upstart Ciudadanos.

“We would love to have a right-wing politician like Cameron who called voters to the polls twice,” he said.