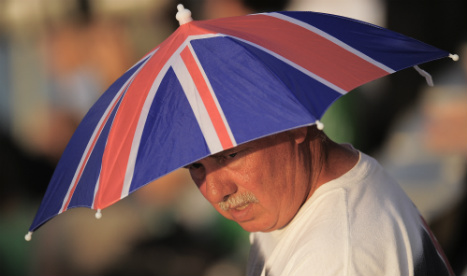 Is a storm brewing for British expats? Photo: AFP

As British PM David Cameron resigned on Friday morning after he failed to convince the British people that it was better to remain a part of the EU, he reassured Brits living abroad “that there would be no immediate changes”.

Interim Prime Minister Mariano Rajoy echoed Cameron’s comments offering a  message of “calm and serenity” to Spanish citizens in the UK and British citizens in Spain.

There would now be “at least two years from the formal notification” of the UK's withdrawal from the European Union, Rajoy said in a televised address: “during that time the security of the legal relationships between the UK and the EU do not change”.

Employment rules, freedom of movement, pension rights and electoral rights would not be affected “at least for the next two years”.

“That is the same for British citizens who live in our country as for those Spaniards living in UK,” he said.

But for the estimated one million Brits who live in Spain or have second homes here, will such reassurances be enough?

While no one will be asked to move home or even be made to apply for a visa or residency permit just yet, what is certain is that uncertainty will reign for the next two years, at least.

Cameron declined to trigger article 50 of The Lisbon Treaty which would begin the painful two-year negotiation process for leaving the EU, preferring to leave it until his successor, which could well be Boris Johnson.

That negotiation process, whenever it does begin, will be key to how life will or won't change for Brits living in Spain and of course the many tens of thousands of Spanish people living in Britain.

So plenty of time to get your Spanish citizenship, if you qualify for it that is.

That deal requires the support of a “qualified majority” of the 27 remaining member states and the UK, so it could be fraught with hurdles.

And given that it will be long and drawn out, there maybe other earthquakes ahead, with several other EU countries openly talking about the need for a referendum.

While the “divorce settlement” as it is being referred to, will focus mainly on budgetary and trade issues, it will also cover the rights of UK nationals in the EU and vice versa.

No one quite knows what the result will be, perhaps because no one really contemplated it seriously enough.

Given so many Brits live in Spain and so many Spanish live in London it is likely the two countries will come to some sort of deal to maintain the status quo.

However most legal experts suggest even if a deal is struck life will get more complicated. A pre-referendum parliamentary committee concluded that British nationals living in the EU will face years of “ghastly” legal limbo.

“This is complex stuff – you are talking about the right to residence, to healthcare and to schooling, about maintenance payments and access to children, about research projects and contracts that cross borders, sorting all this out would be a daunting task.”

All this will need to be thrashed out in the negotiation process.

EU rules place a legal limit of two years on post-Brexit negotiations, but the committee warned that any agreements between Britain and other member states would likely take far longer to thrash out given the countless obstacles that would lie in the way.

“The long-term ghastliness of the legal complications is almost unimaginable,” Sir David Edward, a former judge at the European Union Court of Justice told the House of Lords committee.

One immediate impact of the Brexit on Brits living in Spain is obviously the dramatic fall in the value of the pound following the Brexit result, which means those living off pensions or investments in the UK will see their spending power plummet.

Many expats may not be able to hang around for two years in Spain waiting for deals to be thrashed out as they simply won’t be able to afford it.

Unless the pound recovers, their pensions and investments from the UK, which for many older expats offer their only form of income, will be dramatically cut.

Tens of thousands of Brits move to Spain each year in search of a new life, but they too will have to think again.

The “bargain” properties estate agents have been selling to Brits for years are no longer so affordable to those wishing to sell up back home.

The property market in parts of Spain, especially those overbuilt areas along the costas will be badly hit by the weakening pound.

Many expats in Spain spoke of their shock and fears over their future when they woke up to the result on Friday morning. While the shock may soon fade, the feelings of worry and uncertainty are unlikely to subside for a long time.

“Expats living in Spain are now facing an uncertain future for sure,” said Maura Hillen, an expat who in May 2015 was elected as a councillor in Albox.

“I don't think that anyone can predict what will happen next at this early stage but the most immediate impact will be volatility in the markets which will affect exchange rates and therefore the value of our spending power in Spain.

“We will need to wait a little longer to find out what happens in terms of access to health care, our tax status etc and I assume that UK citizens will lose the right to vote in municipal elections in Spain which means that any influence we held in our local town halls will come to an end.”

One British entrepreneur summed up his feelings over his uncertain future:

“As a British citizen who came to live in Madrid three years ago, I had a plan to build a new company in Spain. With Brexit fears as a deterrent, I've been been holding off committing fully to long term plans for the last six months. I woke up this morning to a paradigm shift where those fears have become a reality,” Tom Evans, founder of Start Ups Made in Spain, told The Local.

“Already I've notified my followers that I'll be closing Start Ups Made in Spain. As a non-EU citizen, I don't feel it is right to continue. It was a project established from within a community of integrated nations, intended to build bridges. I must respect the views of my fellow countrymen and take some time to reflect on my own plans going forward.”