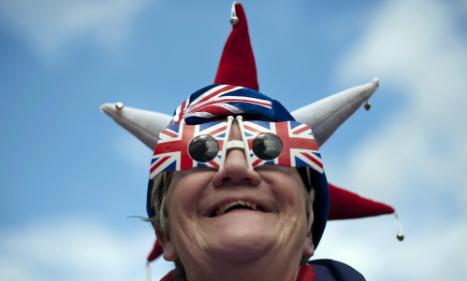 “Darling, bring me up the suitcases from the garage, I’m off to Bristol” said my wife, exaggerating some Spanish consonants, while I was preparing a promising Spanglish breakfast: Galician “empanada” with a layer of Marmite on it. Yes, I’m perfectly aware that the mixture is too tasty, but that’s what happens when you live with a foot in two cultures. Marmite is something that most Spaniards think is only fit to polish your shoes with.

I said a doleful goodbye to my toast, and concentrated on my new challenge. The cases were still there; in fact the cases must have been around since the Napoleonic Wars, judging from the sort of leather and straps they have.  I think we should get rid of them, but my wife insists that they have got a lot of emotional attachment for her. One of these days we will be accused of smuggling antiques.

She has just booked a ticket with Flycrying and in three hours I will see her off to the airport. I don’t understand it, sometimes she is a dissident against her own country, and at other times English chauvinism comes pouring out of her Ascot style hats.

READ MORE: Spain really wants Britain to stay in the EU and here's why

When I’m back I'm going to make a skype call to my daughter, who is studying in Scotland, to see what the political temperature is there. She finds an international atmosphere more inviting than the British one, but lately she is a bit bolshie with the Germans  “They always get the best grades by swotting”, she says with a smirk. I hope her indignation with the Germans will not lead her to vote with the “Leave” camp.

Regardless of their gender, social class, the football club they support, or their level of cholesterol, I quite like the British. Well, let me be more specific, all but those whose priorities are coming to the Spanish beaches, and grilling their backs like sausages. The British are a bit peculiar, they like queuing, celery, and collecting small, ugly souvenirs from places abroad.

They are also good with words. Shakespeare himself made up at least three names in his plays: Jessica, Miranda and Olivia. Now his fellow countrymen have invented Brexit, and some Europeans are not too happy with it. They have branded the British as: ignorant, insular, and narrow-minded.  Winston Churchill said that: “If you are talking behind my back, you are in a good position to kiss my ass”. Following his way of thinking now twenty-seven countries will be  in that uncomfortable position.

I believe some Europeans are very petty about the Brits, because they do as they wish: they drive on the left, dress any which way, and not only invented the sandwich, but added cucumber to it.

Now the most profound philosophers on the globe, and my barber, seem to think that if they part from the EU, the world will collapse back into the Dark Ages.

I, personally, want them with us. Alberto Letona is a Basque journalist living in Bilbao. He is the author of Hijos e Hijas de la Gran Bretaña -Sons and Daughters of Great Britain – in which he delves into the psyche of the British in an attempt to explain them to his own countrymen.