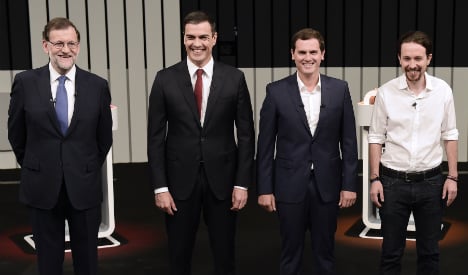 Spain's long-standing two-party system, which has seen the conservative Popular Party (PP) and Socialists alternate power for more than 30 years, has been shaken by two upstarts – far-left Podemos and business-friendly Ciudadanos.

In December elections, these new groupings came third and fourth respectively, taking parliamentary seats away from the established parties in an unprecedented result that left a hung parliament.

In the following months, none of the parties were able to come to an agreement on a coalition government, forcing the country into fresh elections on June 26th.

Polls suggest the PP will come first in the vote but without an absolute majority, as it did in December.

What may change in the upcoming elections is that Unidos Podemos, a coalition consisting of the anti-austerity party and another far-left grouping – coupled with its allies – may come second.

Coalition chief Pablo Iglesias has said that if this occurs, he will seek a deal with the Socialists, which could give them enough seats to pass a left-wing coalition government through parliament.

But there are several stumbling blocks, the main one being that Unidos Podemos supports holding a Scotland-style referendum in the northeastern region of Catalonia, which seeks independence from Spain. The Socialists are strongly against this.

In any case, it is highly unlikely that the PSOE will agree to enter a government with a party it knows wants to replace it as the main left-wing force in Spain, arguing it would be the Socialists' death knell.

In the meantime, acting prime minister Mariano Rajoy's PP will be looking to form its own minority government, with or without the support of its most natural ally, the centre-right Ciudadanos.

The PSOE, instead of agreeing to a coalition with Unidos Podemos, may prefer to ask its lawmakers to abstain in any parliamentary vote on such a PP-led minority government, allowing it to go through.

But in order for that to happen, Rajoy may face huge pressure to step down and another PP politician take his place.

He has been in power since 2011 – a period marked by unpopular spending cuts he argues have helped save Spain from economic collapse, and also repeated corruption scandals hitting his party.

Rajoy himself has never been implicated in these cases, but all his rivals argue that he carries the “political responsibility” for the scandals.

And so it may be that both the Socialists and Ciudadanos will pose as a condition for their support that Rajoy step down – be it voting for a minority government or abstaining.

“There will be huge pressure for him to leave,” says Fernando Vallespin, politics professor at the Autonomous University of Madrid.

Despite its dwindling support, the Socialists could still defeat poll predictions and come second after the conservatives, just as they did in December.

In that case, PSOE could seek a deal with Unidos Podemos for a government led by Socialist leader Pedro Sánchez, on the condition that the far-left coalition gives up its support for an independence referendum in Catalonia.

That is unlikely however. In private, Socialists believe that Podemos will refuse such a coalition and continue to try to supplant the PSOE as the left-wing party of choice in the next elections.

That would bring Spain back to the only viable option – a minority PP government with or without the support of Ciudadanos, and a Socialist abstention.

In any case, all parties have promised weary voters that there will not be a third round of elections.