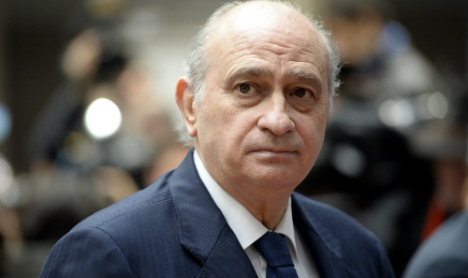 In the conversation published by online left-wing daily Publico, Jorge Fernández Diáz and the head of Catalonia's anti-fraud office go through potential leads or probes that could be launched against pro independence politicians of this northeastern region, or their relatives.

“We have an interior minister, who should be protecting us all, apparently using his post to investigate political rivals,” Pablo Iglesias, head of the anti-austerity Podemos party, told TVE television.

“I think this should trigger an immediate resignation.”

Fernández Diáz immediately slammed the leak as a “conspiracy.”

But he acknowledged that the meeting, which dates back to 2014, had taken place.

“I remember having had this meeting, but as for the content of these conversations, I remember the general gist, which was to meet a magistrate that heads up the anti-fraud office of the regional government, whose mission is to fight fraud and corruption,” he told Spanish radio.

“To claim that an interior minister is conspiring against members of Catalonia's government is surreal,” he said, adding police had been tasked to investigate exactly how the conversation was recorded and leaked.

Madrid and Catalonia's separatist politicians have long been at odds over a pro-independence drive in the wealthy Spanish region.

During the conversation, Daniel de Alfonso, the anti-fraud official, allegedly lays out several leads for possible offences committed by various pro-independence politicians or their relatives, but adds they are all “weak.”

But Fernández Diáz allegedly insists that some can still inflict “a lot of harm politically”.  The revelations come just before Sunday's elections, in which the PP is expected to come first, though without the absolute majority it needs – weakened by the rise of upstart parties like Podemos and several corruption scandals.

Pedro Sanchez, head of the Socialist party, also called on Fernandez Diaz to resign, accusing him of “using the state apparatus to fight against his political rivals and not to fight against corruption within his own party”.

But acting Prime Minister Mariano Rajoy came to his defence, saying he had given a “clear” explanation.

“As we're four days before the end of the campaign, someone is trying to take advantage and fish in troubled waters to see what comes out,” he said.

The elections are the second in six months, after polls in December resulted in a hung parliament after which parties failed to agree on a coalition government, forcing fresh elections.